On February 13, 2007, Falun Dafa practitioner Mr. Chen Jianzhong was taken home in critical condition from the Changsha City Xinkaipu Forced Labor Camp in Hunan Province. Mr. Chen remained on the brink of death and finally passed away on September 14, 2007, at the age of 36. 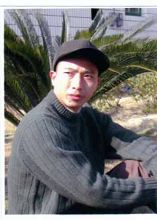 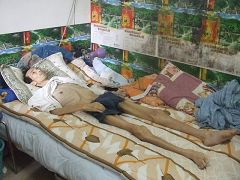 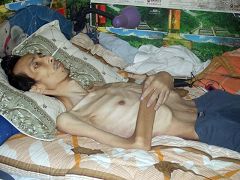 Mr. Chen Jianzhong weighed only 80 pounds when he was taken home from the Xinkaipu Forced Labor Camp by his family.

On September 17, 2007, eight of Mr. Chen's relatives went to the Xinkaipu Forced Labor Camp to seek justice for Mr. Chen. Section Chief Jiang of the Management Section, mainly in charge of persecuting Falun Gong practitioners, denied that the forced labor camp is responsible for Mr. Chen's death. Eventually, he threatened Mr. Chen's relatives, "We are not responsible at all. If you keep causing trouble for us, we'll arrest you!" Another guard said, "We are just following orders from the top. We enforce the law with only a civilized approach and have never persecuted any Falun Gong practitioners. Where's your evidence?" Mr. Chen's relatives had no choice but to leave with great sorrow and disappointment.

That afternoon, Mr. Chen Jianzhong's body was cremated, and his ashes were taken to his hometown for burial. His mother is unaware of his death. His relatives returned home to learn that officials from the Changsha government requested the township to send people to follow them home to keep them from exposing the torture of Mr. Chen Jianzhong.

Mr. Chen Jianzhong from Changsha City was a firm believer in Falun Dafa. He was imprisoned twice and suffered brutal torture at the Changsha City Xinkaipu Forced Labor Camp for clarifying the truth about Falun Gong. In November 2005, he was sentenced to two years of forced labor. In order to rescue him, Mr. Chen's family went through a year-long legal process and spent thousands of yuan. In the end, his family was left with his death and no place to appeal.

Mr. Chen Jianzhong was from Chaling County, Zhuzhou City, Hunan Province. In April 1999 he learned Falun Gong and started his cultivation while he worked in Shenzhen City, Guangdong Province. He said, "During the first month of practicing Falun Gong, I read all of Teacher's lectures, and through this I felt that my mind and body changed dramatically. I understood the meaning of life and decided to cultivate Dafa diligently and return to my true home with Teacher!"

Three months later, Jiang Zemin and the Chinese Communist Party (CCP) started the unprecedented persecution of Falun Gong. Under the sudden overwhelming pressure, Mr. Chen Jianzhong wrote a letter to the executives of his company to explain the facts of why he decided to go to Beijing to appeal for justice for Falun Gong and defend its principles of "Truthfulness, Benevolence, Forbearance." He was arrested at Tiananmen Square but managed to escape and return home with another practitioner. He continued "clarifying the truth" about Falun Gong and distributed truth-clarification materials in Hunan Province.

In November 2001, Mr. Chen Jianzhong and other practitioners were followed by police and illegally arrested while distributing truth-clarification materials in Xiangtan City, Hunan Province. He was taken to the Xinkaipu Forced Labor Camp for a year and a half of forced labor. In the forced labor camp, he protested the persecution and told guards and inmates the facts about Falun Gong. His righteous thoughts instilled fear in the guards, who did not dare to injure him. Many inmates understood the truth and some expressed interest in learning Falun Gong when they were released.

After he was released in 2002, Mr. Chen found a job with Junxin Intellectual Technology, Inc. in Changsha City. He clarified the truth about Falun Gong to his boss, colleagues, and customers and helped many of them withdraw from the CCP. On October 25, 2005, he attended a business meeting with a customer at Yinhua Restaurant, where he clarified the truth about Falun Gong to the customer and later to a security guard in the elevator. The security guard reported him to the police, and he was arrested. On November 1, 2005, the Changsha City Forced Labor Committee decided to put him in Xinkaipu Forced Labor Camp for two years. The entire process, from arrest to forced labor camp, took only one week, without going through any legal procedures.

In order to stop the illegal persecution of Mr. Chen, his brother worked with other Falun Gong practitioners to go through the legal process to seek justice for Mr. Chen.

In November 2005, Mr. Chen's family requested an Administrative Reconsideration from the Changsha City Legal Enforcement Committee to nullify the Forced Labor Committee's decision, with no success.

In March 2006, Mr. Chen's family filed a lawsuit against the Tianxin District Court in Changsha City. However, on April 19, 2006, the court held a trial but did not inform the plaintiff. This was an obvious violation of the legal procedure. The judge and the representative of the defendant Forced Labor Committee could not answer the questions from Mr. Chen's family and their attorneys, dancing around the questions and finally claiming that they were "following the policy set up by the top." The judge then announced that the trial was adjourned and that he would pick another day to continue.

On May 16, 2006, the Tianxin District Court continued the trial but did not inform Mr. Chen's family. Their attorneys informed Mr. Chen's family that they were under severe pressure from the government not to inform them about the trial in advance. The government was afraid that too many people would come to the court and that something could happen unexpectedly. The government also sent almost one hundred fully armed policemen to guard the court. During the trial, Mr. Chen Jianzhong solemnly presented his case. He used his own experiences to describe the righteousness of Falun Dafa and exposed the illegal persecution of Falun Gong by Jiang Zemin's group. The attorneys helped to demonstrate that the charges against Mr. Chen lacked evidence and also that the procedures were illegal. The judge and the representative of the defendant could not say a word. The day after the trial was adjourned, Mr. Chen's family learned that the court decided to uphold the original judgment.

On August 16, 2006, Mr. Chen's family appealed to the Changsha City Intermediate Court, which announced a judgment of last resort to uphold the original decision without any trial or investigation.

On October 13, 2006, Mr. Chen's family appealed to the Hunan Province High Court. The High Court refused to accept the case and pushed it back to the Intermediate Court.

While Mr. Chen's family was seeking legal recourse to rescue Mr. Chen, the Xinkaipu Forced Labor Camp carried out many injustices against Mr. Chen Jianzhong, including physical assault, sleep deprivation, electric baton shocking, and more than three months of solitary confinement. When Mr. Chen had difficulty breathing, the forced labor camp did not stop torturing him. At the year-end annual exam, doctors found that Mr. Chen was in critical condition and reported it to the executives of the forced labor camp. The Xinkaipu Forced Labor Camp was afraid that he might die there, so they granted Mr. Chen a medical leave.

On February 13, 2007, Mr. Chen Jianzhong was dying and weighed only 80 pounds when taken home by his family. In early August, his health deteriorated further; he did not have strength in his limbs and could not eat or drink. He passed away on September 14, 2007, after struggling for survival for about one month.

During this process of trying to secure Mr. Chen's release, Mr. Chen's relatives and people who were involved in the case, including the attorneys and law enforcement officers, saw the CCP's evil clearly. Many people withdrew from the CCP and its affiliated organizations.

We appeal to the international community to pay attention to the plight of Falun Dafa practitioners who are being tortured in prisons, forced labor camps, detention centers, brainwashing centers, and other places, so that we can bring the ongoing persecution to an end.