(Clearwisdom.net) On September 17, 2007, the President of Israel met with Liu Peng, Chinese Minister of the General Administration of Sports and President of the Chinese Olympic Committee. In front of the President's office, the Coalition to Investigate the Persecution of Falun Gong (CIPFG) and other human rights organizations conducted activities to protest the Chinese Communist Party's (CCP) persecution of Falun Gong and other groups of righteous belief. The protesters held banners worded, "Olympic games cannot coexist with human rights persecution" and exposed the CCP's escalation of human rights abuses under the excuse of security related to the upcoming Olympic Games. 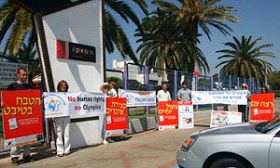 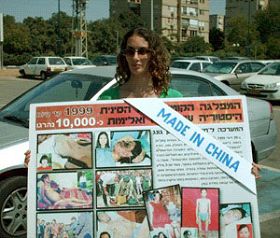 Crimes "made in China"

After the meeting, the CCP delegate's motorcade left the president's office and passed by the protestors. Many reporters took photos of the protests. They said that many people are paying attention to China's human rights issue. International human rights organizations are playing bigger roles, giving people hope in the victory of truth.

On September 19, Liu Peng was scheduled to hold a press conference at the Olympic Committee building in Tel Aviv. A large number of protesters gathered there. Reporters from the mainstream media also gathered there. At the last moment, it was announced that the CCP had cancelled the press conference. Thus, all the reporters covered the protest activities and interviewed the representatives from the various organizations that were present. The representatives exposed the CCP's crimes of organ harvesting from living Falun Gong practitioners and the CCP's violation of the Olympic spirit. They told the reporters that the history of the 1936 Olympic Games, where the Nazis tried to cover up their crimes of genocide, must not be repeated in China.

On the same day, several Israeli media reported on the CCP's persecution of Falun Gong, the illegal organ trade and other facts of human rights abuses in China. The reports also mentioned that the press conference of the visiting Minister of the General Administration of Sports was cancelled because Liu Peng was afraid of questions being raised about the human rights situation in China.