The annual Chinese Communist Party (CCP) celebration, China National Day, on October 1 is becoming the Chinese people's day to awaken and quit the CCP and its affiliated organizations. Activities are being held in many places across the world to support the withdrawals from the CCP. 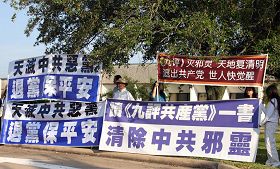 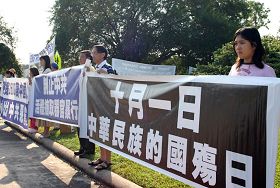 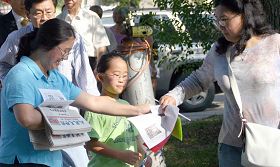 On September 29, 2007, a rally supporting the tide of withdrawals from the CCP was held outside the Chinese Activity Center. Though the Chinese Consulate made detailed plans to request the police to block public zones in front of the consulate and neighboring area, the rally was held as planned. The event, "Supporting 26 Million Chinese People Quitting the CCP and Its Affiliated Organizations" was sponsored by the Global Service Center for Quitting the CCP, The Epoch Times newspaper, and Falun Gong practitioners.

It has been 58 years since the CCP took power and since that time, at least 80 million Chinese people died unnatural deaths due to various CCP persecutions and political movements. The CCP maintains power through lies and violence. Nowadays, hundreds of thousands of Falun Gong practitioners are persecuted in China. At least several thousand practitioners are verified to have been tortured to death.

In July 1999, the Chinese Communist Party initiated the persecution against Falun Gong practitioners. Facing the eight-year-long persecution, practitioners continue to follow Truth-Compassion-Tolerance and have been protesting the persecution with peaceful and rational truth-clarification activities. Falun Gong has become known to the whole world and has spread to more than eighty countries.

On a public lawn, the rally participants held various banners reading, "October 1, memorial day for Chinese people," "Stop persecuting Falun Gong!" "Stop organ harvesting from living Falun Gong practitioners," "The Nine Commentaries are causing a wave of quitting the CCP," "Read the Nine Commentaries, eliminate the CCP evil spirit," "Supporting 26 million Chinese people quitting the CCP," "Heaven will destroy the CCP. Quit the CCP for a safe future," "The CCP is not China. Loving China does not mean loving the CCP." The loudspeaker continued playing a recording of the Nine Commentaries on the Communist Party, catching people's attention.

An older man had just accepted a small red CCP flag when he saw the various banners supporting withdrawals from CCP. After reading the messages, he lowered his hand that was holding the red flag, then left it on ground and walked away.

A middle-aged woman read the banners while a volunteer from the Service Center for Quitting the CCP pointed at the banner worded, "The Nine Commentaries are causing a wave of quitting the CCP." The volunteer said, "Look, how powerful the Nine Commentaries are." Hearing that, the woman began condemning the CCP: "The CCP has committed many crimes. I come from China. I know that during various political movements, the people have suffered a lot." The volunteer said, "Some high level CCP officials have gotten passports in Australia to prepare for the future." The woman said, "Because they have committed too many wrongdoings. I have been reading your information. I know this very well in my heart."

The Chinese Communist Party is terrified to see the wave of withdrawals and the people's awaking. More and more Chinese people recognize the evil nature of the CCP and are renouncing it for a new life.