The NTDTV Chinese New Year Spectacular had four shows at the George Washington University Lisner Auditorium on January 26 and 27, 2007. More than 6000 people from each community, including politicians, businessmen, lawyers, college professors, school teachers and students, came to enjoy the pure Eastern art. The dance and songs displayed the divine contents of traditional Chinese culture. The programs also included stories of the virtues of loyalty and filial piety of ancient Chinese characters. The Spectacular was welcomed and highly praised by the audiences in Washington D.C. 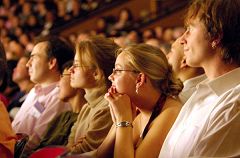 Audiences are attracted to the show. 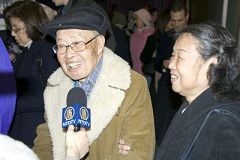 An audience is telling the reporter his feelings about the show. 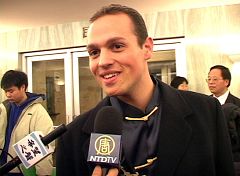 Wei Mengming, a student at George Washington University, who can speak fluent Chinese, likes the show very much. 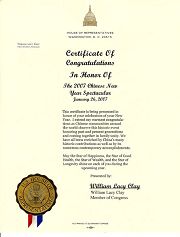 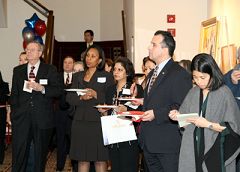 The VIP reception before the show

The show started with the dance "The Vow," which described the origin and purpose of life through a Western story. The benevolent gods made pledges to come down to the human world and save people.

The lotus flower dance, fan dance, Manchu dance, Mongolian dance, story of Yue Fei, Hua Mulan, the Tang-Dynasty-style drum and other performances which showed the principle of "good meets good and evil meets evil" amazed the audiences. When Bai Xue, the famous singer, sang "So vast are heaven and earth, whither do people go? Lost, the way is obscured, let truth be the compass. When disaster descends, it favors neither rich nor poor. But there is a way out -- quickly find what is true," the audiences gave her thunderous applause.

The compliments from people in Washington D.C.

The shows were complimented by people from each class. The art design, costumes, music and dance amazed all the audiences.

Andy Pepin, an officer from the Department of Education, who came to the Spectacular for the first time, said that the show was fabulous, and demonstrated a unique culture. Pepin said that singing and dancing is the best way to spread a culture and enhance communication between nations.

A lady who works for the Department of Justice invited NTDTV workers to introduce the Chinese New Year Spectacular at her workplace before the show. After the show, she said that all the performances, such as the Mongolian dance and Erhu solo, were very beautiful.

Mr. Eric Luther, an officer working for the government, said that he liked the performances very much. He said that the costumes were very beautiful and the drum performance was very attractive too. He thought that it is a very good way to celebrate the Chinese New Year.

Mrs. Shannon Rice from Springfield, Virginia, likes Chinese culture. She said the performances were beautiful and it was the kind of show she expected.

Wei Mengming, a student from George Washington University, who speaks fluent Chinese, told a reporter that he was very glad to see such a great show in Washington D.C.

Mrs. Faith McDonnell, who works at the Religion and Democracy Association, takes her daughter to the Spectacular every year since she saw the show in Kennedy Center in 2004. After the show on January 27, 2007, she told a reporter that the performance is very good and the Spectacular is getting better and better every year.

The Spiritual Content of the show moved the audiences.

The spiritual content of the show moved the audience with its benevolent and pure power.

A Chinese person, who grew up in U.S.A., said he cried five times during the show, because the stories and the content in the songs were very touching.

Teresa Williams, a government employee, said that the first performance, "Pledge," touched her deeply. Everybody is from the heaven and gods sent us down to the human world to save souls. She said that it was very beautiful.

A medicine doctor was grateful for the performers who shared the benevolent, kind and elegant art with everybody. She thought that those are the most beautiful things in the world.

John Hemenway, a former diplomat, highly complimented the art design and the costumes of the show. He said that he was deeply impressed by the spiritual power in the show. The song about Tiananmen Square told people about the persecution. Mr. Hemenway said that the message that the song tried to express was very clear, and made people think.

Mr. Lewis, a manager of a big company in Washington D.C., praised the show. He said that he liked every performance, and he was very touched by the songs, especially the song "Tiananmen Square, please tell me." He said that he understood the song and he almost cried.

Philip, a government employee, said that he understood the content about Falun Dafa in the songs. He said that it is a high level cultivation, although he himself doesn't practice it.

Many government employees enjoyed the show and many of them have good understandings of the spiritual content of the show. Andrea, a documentary movie maker, said that art cannot be independent of politics and history, for they come together. She said that when audiences were enjoying the beauty of Chinese culture, they should also appreciate the suffering that Chinese people had, in order to keep the beauty of the culture. She said that it is very important to combine art and history together.

Mr. Wang Zhenhua, a Chinese community leader and the president of the Chinese Association in Washington D.C., said that the performances were pure Chinese. He felt that he had a pure Chinese New Year and the feeling was very special.

Mrs. Liu, who came to America two years ago, said that people cannot see such a show in China, and this show is very traditional and has the characteristic of Chinese culture.

Mr. Xia from Virginia watched the DVD of the Spectacular last year, and liked it very much. So, he came to the show this year. He said that this was a show which demonstrated the true Chinese culture and cannot be seen in China.

The dance "Return" is a story about a female Falun Gong practitioner who didn't give up her belief and was killed by an evil policemen. But gods are watching everything. Her life was lifted up to heaven. The murderers received their due punishment. Mr. Xia was very touched by this dance. He knows what is happening in China, since he is from China. He knows that Falun Gong practitioners are kind people and benefited from Falun Gong. He said that it is the reason that more and more people started practicing Falun Gong. Mr. Xia has sympathy for the practitioners who have been persecuted in China. He is disappointed at the government for not giving people freedom of belief. Mr. Xia said that people know what is righteous in their hearts.

A Chinese professor who teaches Chinese at a famous college in Washington D.C. required his students to come to the show so that they would learn the true Chinese culture.

Chris Van Hollen, a Congressman from Maryland, thanked NTDTV for bringing the Spectacular to the Washington D.C. area.

Congressman Thaddeus McCotter said that he wishes every Chinese a happy New Year. He wishes that God will bless the Chinese people to fight for their freedom. He also wishes that people will remember our common wish for peace and freedom when enjoying the different culture and the Spectacular.

Congressman William Lacy Clay sent a certificate of congratulations to the Spectacular.

Many VIPs, including politicians, intellectuals, lawyers, businessmen and people from non-government organizations attended the VIP reception on January 26 before the show.

The last show ended at 10:30 pm on January 27 with audiences' thunderous applause.

“Germany: Falun Gong Association in Germany Protests at the Singapore Embassy in Copenhagen”