(Clearwisdom.net) Toronto's New Tang Dynasty Television (NTDTV) Chinese New Year Spectacular came to a successful conclusion on the evening of January 20, 2007, at the Toronto Center for the Arts. The four shows attracted about 6,800 Western and Chinese audience members who appreciated the authentic programs of Chinese divinely-imparted culture. 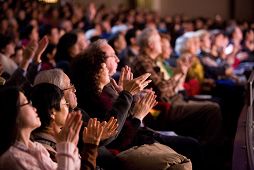 The audience is amazed by the brilliant performance

When I first heard soprano Bai Xue sing "Finding Truth," I could not help crying. Later when I exchanged experiences with fellow practitioners, I understood that this is a manifestation of Lord Buddha's enormous compassion and wisdom. These beautiful and artistic songs and dances let people with predestined relationships see the wonderfulness of Dafa and hear the truth and Gods and Buddhas' compassionate calls.

During the show performed at 2:00 p.m. on January 20, I sat at the last row. I noticed two Chinese ladies with glasses sitting in the row in front of me. Whenever there was a program related to Falun Gong, they whispered comments to each other. When Bai Xue started singing "Finding Truth," they calmed down slowly. Bai Xue repeatedly sang, "When disaster descends, it favors neither rich nor poor. But there is a way outï¿½"quickly find what is true!" When she sang the third time, I heard people around me sobbing, and I saw the two Chinese ladies take off their glasses and slowly wipe their tears away.

"It's Not Enough to See It Only Once"

After the last show in Toronto on January 20, more than 200 performers and staff had a meal together at a Chinese restaurant. The restaurant manager, who had seen the performance, stood at the entrance politely to welcome every performer.

He said to the staff, "I feel it was not enough to see it just once. The lyrics were so good, every sentence touched me. They are all basic principles for being a human being."

He added, "Many of our employees wanted to go, but had to miss it due to work. They really regretted it."

Canadian ladies liked the songs in the show

On the afternoon of January 20, two "Miss Canadas" came to the performance. I asked them what they liked best. One of them replied, "I liked the singing very much." Curious about the language difference I asked, "Could you understand the words?" She said, "I could understand all of them with the help of the lyrics on the backdrop and by the way the singers interpreted their songs. I really liked it, and I could understand it all."

Four Generations of One Family Came to the Performance Together

The four generations family of Ms. Sun's family watched the performance together

Ms. Sun came with her 90-year-old mother, her daughter, and her four-year-old granddaughter to watch the show. Ms. Sun said that when her mother watched the show, she felt she was filled with warmth and was very moved. Her mother told her that young children should be educated with these traditional stories that awaken people's kind thoughts. It would benefit a child throughout his/her whole life if the child had such kind thoughts.

My Daughter Obtained a "Returned" Ticket

I helped promote ticket sales for the shows beginning last October. The day prior to the performance, my 16-year-old daughter asked me which show her ticket was for. I realized I had not yet bought a ticket for her. I quickly took her to the theater before the performance started. When I saw there was a ticket booth at the reception desk, I was so happy. When I was told all the tickets were "sold out," I was disappointed.

Just then, an audience member rushed up to the ticket booth with a ticket in hand, asking, "Can I return this extra ticket?" I grabbed the ticket from her hand and said, "Yes, you can return it. I want it."

My daughter took the ticket and rushed into the theater.

My daughter is an eleventh grade student at a high school majoring in singing. After the show was over, she said, "The orchestra's accompaniment was glorious and beautiful!"