Canadian Minister of Foreign Affairs: We Continue Our Active Efforts to Seek Verification and Corroboration with Respect to Allegations of Organ Harvesting from Prisoners in China (Photo)

On Dec 22, 2006, Mr. Peter G. MacKay, Canadian Minister of Foreign Affairs, wrote a letter to a Falun Gong practitioner in Toronto, Canada, concerning the allegations of organ harvesting of Falun Gong practitioners in China. Mr. Mackay said in the letter: "We continue our active efforts to seek verification and corroboration" and "I can assure you that the Government of Canada will continue to express clearly its concerns regarding human rights and fundamental freedoms to the Chinese authorities." Below is the text of the letter. 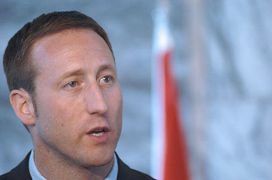 Your Member of Parliament, the Honourable Jim Peterson, has forwarded to me on July 29, 2006, a copy of your letter and enclosed documentation, concerning allegations of organ harvesting of Falun Gong practitioners in China. I regret the delay in replying to you.

A number of Canadians have brought to the Government of Canada's attention allegations regarding the existence of concentration camp-style prisons for Falun Gong practitioners located throughout the People's Republic of China. In addition, concerns have been raised with respect to allegations of organ harvesting from prisoners interned in these camps, as well as those detained at other facilities. These allegations are alarming and the Government of Canada takes them extremely seriously.

Since these grave allegations were made public in March 2006, the Government of Canada has maintained an active effort to seek verification and corroboration of such claims. Canadian government officials have, on a regular basis, been in contact with non-governmental organizations, like minded countries, as well as Mr. Manfred Nowak, United Nations Special Rapporteur on Torture and Other Cruel, Inhuman or Degrading Treatment or Punishment, in order to share information. In addition, Canadian government officials have met regularly with Falun Gong representatives in Canada and have found such exchanges very useful in Canada's continuing efforts to verify and corroborate these allegations. The report entitled Report into Allegations of Organ Harvesting of Falun Gong Practitioners in China, published on July 6, 2006, and co-authored by the Honourable David Kilgour, the Government of Canada's former Secretary of State for Asia Pacific, and Mr. David Matas, Barrister and Solicitor, has also been useful in bringing together available information on this issue.

A central goal of Canada's foreign policy toward China is focusing increased attention on the human rights conditions in that country, and working to improve these conditions. Canada is greatly concerned about the treatment of spiritual groups in China, including the Falun Gong, and continues to raise these matters with the Chinese government on all appropriate occasions. Canada is also worried about the illegal organ transplantation from executed prisoners in China. Canadian government officials have emphasized to the Chinese authorities their concern that all organ donations in China must take place with the free and informed consent of the donor, consistent with international norms.

With respect to the allegations of organ harvesting from Falun Gong practitioners, we continue our active efforts of seek verification and corroboration, and welcome any additional information you wish to provide in this regard.

I can assure you that the Government of Canada will continue to express clearly its concerns regarding human rights and fundamental freedoms to Chinese authorities.

Thank you for taking the time to write and share your views.

“Remembering the Days I Attended Master's Lecture in Guangzhou City”