San Francisco: Congratulating the 17 Million Brave Chinese People Who Have Withdrawn from the Communist Organizations (Photos)

(Clearwisdom.net) The California Service Center for Quitting the Chinese Communist Party (CCP) held a celebration activity at Garden Corner Square in San Francisco at noon on January 14, 2007, to support the more than 17 million Chinese people who have quit the CCP and its affiliated organizations. San Francisco Divine Land Marching Band also made an appearance in Chinatown to show support and add zest to the rally. The Minghui School dance team also presented performances, attracting many passersby to stop and watch. The square was filled with a festive atmosphere. 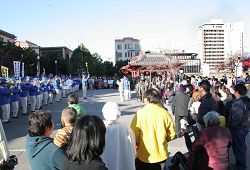 During the rally, many people passing by were attracted by the performance given by Falun Gong practitioners at Garden Corner Square in Chinatown 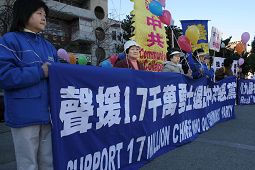 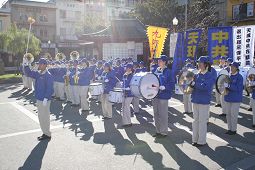 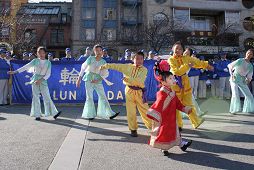 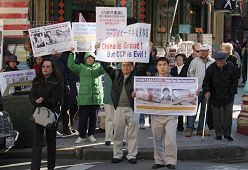 The host of the rally, representative of the North California Service Center for Quitting the CCP Ma Youzhi, said that more than 17 million Chinese people have quit the CCP and its affiliated organizations. "This is a day worth celebrating, but there are still many Chinese people who have been deceived by the CCP evil specter. We hoped to let everybody hear what the Chinese people have to say through this rally and see clearly the nature of the CCP." 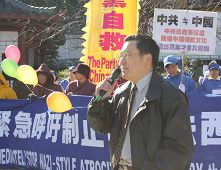 A company manager: "The straw that breaks the camel's back"

Senior manager of a hi-tech company in the Bay Area Mr. Wang Feng used an English idiom "the last straw" in talking about those that have withdrawn from the CCP. He said that the number of people who have quit the CCP as of today is 17 million. Nobody knows at which number the CCP will collapse. But the issue is, when "the last straw" does bring about the collapse of the CCP and you still have not quit, there will be no more chances for you to quit, and you will have to bear the mark of the beast imposed upon you by the CCP forever.

Wang Feng also said that nobody wants to be the last, single straw because it is too dangerous. Due to the Internet blockade, only about 30,000 people have announced their withdrawals [on The Epoch Times website], but many people more want to quit the CCP and its affiliated organizations. Just like before an avalanche, it will then be very dangerous for you if you do not quickly withdraw from the CCP.

Wang Feng mentioned the CCP's heinous practice of harvesting organs from living Falun Gong practitioners. This evil organization, the most evil and brutal organization in history, has killed 80 million Chinese people, and it still continues to kill even now. Shouldn't people be quick to break away from this wicked organization?

Dr. Zou Wei said that since the CCP seized the power over 50 years ago, it has never ceased extracting the Chinese people's sweat and toil, particularly in the past ten years, China has introduced huge foreign investments, high-rise buildings, and large mansions in its cities, which are in the midst of constant construction. On the surface they look prosperous. The average Chinese citizen, by this time, should have made great progress, but ordinary Chinese generally feel much more pressured than before, and their living standards are actually becoming worse. They dare not see doctors when they fall ill, their children dare not go to college [because of high tuition fees], and many people cannot afford to buy their own homes.

Zou Wei recounted that some friends said that, although they know the CCP is no good, how could the Chinese people live if the CCP collapsed? Dr. Zou gave an example of a patient with schistosomiasis (parasitic flatworm infestation) that went to see a doctor. The doctor said only by removing the schistosomes from his body would he recover. If the patient said, "Doctor, if you remove the schistosomes from my body, how can I live?" everybody would think that this patient had something wrong with his mind. Chinese people have a history of 5,000 years. For over 4,900 years, China was not ruled by the CCP, but the people got along just fine. During the CCP's fifty-odd years in power, many disasters have befallen the Chinese people. Without the CCP, the Chinese people will live even better and more wonderful lives.

Falun Gong practitioner Shu Nan: More than 17 million withdrawals from the CCP is the best reason to celebrate the New Year

Falun Gong practitioner Shu Nan said, "At the beginning of 2007, we are here to congratulate more than 17 million brave Chinese people who have withdrawn from the CCP and its affiliated organizations. It is the best reason to celebrate the year 2007." Shu Nan talked about the significance of quitting the CCP from the perspectives of China's Constitution and safeguarding human rights. He said that the large-scale human rights movement in China started in the late 1990s, and it is no coincidence that the great wave of quitting the CCP started during that time.

Professor Xia complains the CCP with his own experience

Professor Xia from the Bay Area said that she was only eleven years old when the CCP started ruling China. The CCP beat and killed people, one group after another. The deepest impression she has was the anti-rightist movement in 1957. Her respected teacher was deemed to be an enemy for no reason. One teacher, Mr. Wang, taught Marxism. He said one sentence: "Marxism is like a cup of plain boiled water, but is not as thick as tea." As a result, he was labeled a rightist. Two of Mr. Wang's friends from the Northeast of China were also named Wang, and they often got together. They were labeled the "Three Wangs' Anti-Revolutionary Group." Professor Xia said that such an example is enough for people to see the true nature of the CCP. She hoped the Chinese people would be brave enough to stand up and renounce the CCP and disintegrate it.