On January 12-20, the Chinese New Year Spectacular will present a total of eight more Canadian shows, in Ottawa, Montreal and Toronto. On January 10, Canadian Prime Minister delivered a New Year Greeting to all Chinese Canadians through NTDTV. 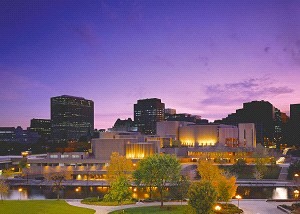 On January 10, Canadian Prime Minister Harper had a special greeting clip delivered to the Ottawa organizing committee of Chinese New Year Spectacular two days before the Show. He said, "Nihao [Chinese greetings], on behalf Canada's new government, I would like to offer my warmest greetings to all Chinese communities as you welcome the year of the pig. I have reason to celebrate too because I was born in 1959, also the year of pig." 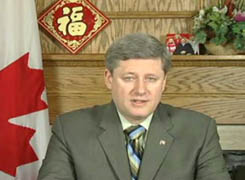 "The Chinese New Year has become an important part of the Canadian culture landscape, which tells us just how big a role this community plays in modern Canada. That role is rooted in a long history, from your ancestors' involvement of the building of the national railway in the 19th century to full participation in every aspect of the community like today, Chinese Canadians have shaped this wonderful country we all call home..."

At the end of the clip, the prime minister said "I wish you a prosperous year" in Cantonese.

Canadian Governor General Michaï¿½lle Jean also sent her greetings. She wrote, "I encourage you to share with your fellow citizens and take every opportunity of enlivening our society with your unique contributions... Each person-woman, man or child-can take away from this day a sense that we are creating a better Canada, where people can rejoice in their distinctiveness, while at the same time being a part of a larger community."

In a congratulatory letter, Canadian Minister of Environment John Baird wrote, "This unique world-renowned celebration is a brilliant example of the beauty and elegance of the Chinese culture."

According to NTDTV president Zhong Lee, the Chinese New Year Spectacular will visit near 30 major cities around the world and present more than 60 shows. Most of the shows are to be held at world class theaters. From Vancouver's Queen Elizabeth Theater, San Francisco's War Memorial Opera House, to Hollywood's Kodak Theater, seven shows have been performed. Almost every show had a full house, and nearly 20,000 have enjoyed the performance. In the coming ten days or so, the Spectacular will be performed at National Arts Centre (Ottawa), Theatre Maisonneuve (Montreal) and Toronto Centre for the Arts.

Dr. Zhi Jing, one of the organizers of the Ottawa show, told reporters, "This NTDTV show invites the Chinese and western audience to enjoy authentic traditional Chinese culture and arts and emphasizes traditional Chinese values such as paying homage to Buddhas and Gods, respecting heaven, loyalty and filiation."

"In the past several decades, traditional Chinese culture has been largely replaced by communist culture which services politics. For most western people, their understanding of Chinese culture often starts from several movies such as "Mulan." We have full confidence that this show will bring them a rewarding experience of authentic Chinese culture."