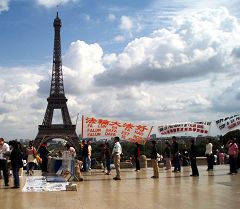 Falun Gong practitioners showed evidence of the persecution by the CCP and witnesses’ testimony of the existence of concentration camps on the display board. Many people were shocked by this barbaric suppression by the CCP. They could not accept such inhuman behavior and expressed their condemnation—many of them signed the petition to support Falun Gong practitioners. Many passersby said that this kind of activity is very good and practitioners should continue to do this to let more people know about this brutality.

A French citizen asked for many leaflets and said, "This persecution should not exist, the Chinese government is afraid that these practitioners will gain power, but this comes from its political mindset. The truth of the concentration camps has really shocked me—this is our humans’ mistake. Many things that are happening in China now have not been revealed to the rest of the world, so I think what you are doing now is very good. The French government should help by diplomatic means."

Ms. Martina used to study and work in China. She said to us, "The first time I went to China was in 1976 after the Gang of Four was dissolved and the last time I went to China was in May 1989, I was in the Tiananmen Square with those students [during the Tiananmen massacre]. I never went there again. I have heard many stories, however, I did not know that the persecution is still going on. I think it is great to let people know and understand everything that is happening in China."

Falun Gong practitioners also demonstrated the five Falun Gong exercises and distributed leaflets to passersby to introduce the practice of Falun Gong. Many people were attracted by the gentle and relaxing exercises. They kept taking pictures and asking how and where to learn them.

“Singapore: One Year of Truth Clarification on the Streets (Photo)”