(Clearwisdom.net) September 2 is City Day in Moscow, and hundreds of thousands of Moscow residents celebrated the 859th anniversary of the city at more than 300 sites. 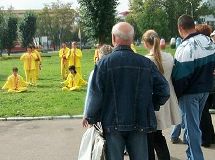 The slow and smooth Falun Gong exercises attracted many spectators

Moscow Falun Gong practitioners participated in the celebration at several different sites in the city. They presented the Falun Gong exercises, dances, gave out paper lotus flowers and performed songs which were well-received. From their participation, many people learned the facts about Falun Dafa and about the ongoing brutal persecution in China.