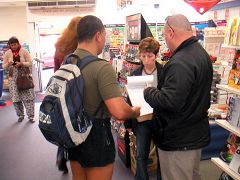 Signing their names to condemn the CCP

A lady, who works at an animal protection facility, said "Even animals are being protected, so how can people be so brutal to their fellow human beings?" She said, "You should let more people know about it and expose the CCP’s brutality." She signed her name on the petition.

A young man asked practitioners why the Chinese people passing by didn’t sign the petition. Practitioners told him that many Chinese people have been deceived by the CCP, and some of them are afraid of the CCP’s persecution. The young man said, "Let me help you." He went to collect signatures on the street and got 75 signatures in 40 minutes. He said, "I should have come here earlier today. I could have collected more signatures." Before he left, he had his photo taken with practitioners to show his support.

Another young man told practitioners that the father of his Chinese girlfriend had the same experience of being persecuted by the CCP. His organs were also harvested when he died.

“Taiwan: Falun Gong Practitioners Send an Open Letter of Advice to Lee Kuan Yew: Do Not Be the Chinese Communist Party’s Accomplice in the Persecution of Falun Gong (Photos)”