"It is not that it's painful on the path of cultivation,
Karma of lifetimes and lifetimes impedes;
Steeling the heart, eliminating karma, cultivating xinxing,
Forever possessing a human form is a Buddha." 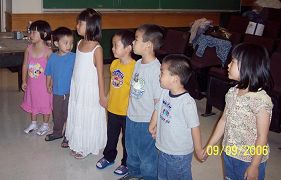 Every Saturday, more than 10 young practitioners from the Minghui School, ages 5 to 7, pass out truth-clarifying materials in front of the Chinese Consulate and then they get together to recite and memorize Master Li's poems in Hong Yin. Instructors, who are also Falun Gong practitioners, explain the meaning of the poems with plain language, and teach them the principle of "Truthfulness-Compassion-Forbearance" through story-telling and games.

Teachers ask young practitioners questions, by which they lead the children to a better understanding of the concepts in cultivation, such as karma and de (virtue).

The young practitioners also learn the exercises. During this process, they help each other to correct the movements and get rid of the attachment to laziness.

After the exercises and reciting, the children have some play time. The instructors tell them stories from the Minghui/Clearwisdom website, and teach them to sing songs composed by practitioners. Sometimes the children perform the story that they heard or share their experiences of cultivation in the past week.

There are two brothers in the Minghui School whose mother is not a Falun Gong practitioner. One day after the class, they told the teacher: "We go to two Chinese schools, but we like this one because we can learn Falun Dafa here." Their mother also told practitioners that her children's behavior has improved through the Minghui School, and she is very happy about it.