Cruel Camp Medical Doctor: "I Inserted the Tube Into Your Trachea on Purpose" (Photo)

My name is Gao Ke and I am 52 years old. Formerly I was a teacher at Yumin Primary School in Daowai District of Harbin City. In late 1996, I began practicing Falun Gong and my old illnesses, (gallbladder stones, kidney stones, gallbladder inflammation, herniated vertebral disc, rheumatism, coronary heart disease, and elevated lipids, etc.), all disappeared. Also, because I followed the Dafa principles of Truthfulness - Compassion - Forbearance in my life, my interpersonal relationships with family, neighbors, and co-workers improved and became more harmonious. With the elevation of my moral standard, I became healthier and happier and wanted to shout from the bottom of my heart, "Falun Dafa has saved me! Falun Dafa is good!".

I continue to practice Falun Dafa and live according to the standards of Truthfulness - Compassion - Forbearance. Thus, I have been persecuted on several occasions by unlawful arrest, searches of my home, confiscation of personal property, fines and physical abuse. 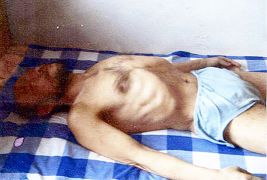 Following the first arrest, I was illegally sentenced to serve one year at Changlinzi Forced Labor Camp in Harbin City. After an 83-day hunger strike and suffering much cruel persecution, I finally walked out of that den of evil. During the second illegal imprisonment, I held a 16-day hunger strike to protest the persecution. I was near death and spitting up blood when I stepped out of the No. 2 Detention Center of Harbin City in an open and dignified way. The third time I was again sentenced to serve three years at the Changlinzi Labor Camp. While detained, I experienced the brutal persecution of "squatting on the heels" several times, sitting on a hot iron chair (more than 10 times), and shocking by electric batons. Most cruel was electric shocking with fully charged batons on my eyes, genitalia, and heart for up to 50 minutes at a time. This caused painful burns all over my body. The most vicious and violent camp staff member was the head of the No. 5 Brigade, Zhao Shuang. On numerous occasions I shouted, "Falun Dafa is good!" and was able to eventually break away from this horrible place.

The fourth time I was brutally persecuted occurred during a recent incident at the No. 1 Detention Center, Daowai District, Harbin City. Below I relate an account of the persecution I experienced so as to expose the evil and stop this inhuman persecution against innocent Dafa practitioners.

On February 27, 2006, while chatting with some acquaintances on the street, I was unlawfully arrested by the Dongyuan Police Station of Daowai District. Later that same night I was transferred to the No. 1 Detention Center. In order to protest this mistreatment, I went on a hunger strike. On the fourth day, savage forced feeding started.

The camp hired three medical doctors from the outside to be on duty at the internal clinic. Two doctors were of the surname Wang and another was called Lian. The first forced feeding was performed by a Dr. Wang who had a crew cut hairstyle. I was restrained to an iron chair with my hands cuffed to the back of the chair. Several convicts restrained me while the camp doctor inserted a plastic tube the size of a little finger down my throat. This caused me to nearly suffocate, as I was desperately twisting my body due to the extremely painful suffering. With so many convicts holding me down by force, Dr. Wang did not care to remove the plastic tube until I nearly lost consciousness. Later he said, "I am a surgeon and I know how to do forced feeding very well. That time I purposely inserted it into your trachea." How could he ever call himself a doctor, who is supposed to be someone that helps others? Isn't he actually a criminal dressed in a white uniform? During the savage forced feeding, I felt I was suffocating several times and that kind of suffering is excruciating. This is one situation from my own experience that demonstrates how the CCP acts with utter disregard for the human lives of Dafa practitioners.

Another camp medical doctor named Dr. Wang, who was bald, was also very wicked. On two occasions, after force feeding me, he did not remove the nasogastric tube, but left it inserted and taped it to my face. My hands were cuffed behind my back and several convicts restrained me to prevent me from moving my body. I suffered from chest pain and difficulty breathing. This suffering lasted for about six or seven hours, until I was on the verge of death inside the detention cell. This was the most severe suffering I encountered as a result of forced feeding. The other incidents of forced feeding were also terribly painful. The plastic tube inserted into the stomach through the nose usually causes damage and infection to the respiratory tract and the stomach. Every time the tube was removed, it was covered with blood. Nobody cared if the victim contracted an infection. Also, the savage forced feeding contained some unknown drugs, and I felt terribly ill after each session.

(Picture: Savage forced feeding caused ulcers at the corners of Mr. Gao's mouth. His mouth was injured and bleeding so much that bloodstains were on the socks that were stuffed into his mouth.)

Inside the detention cell, I continued to clarify the truth about Falun Gong. I also continued to do the Falun Gong exercises. Therefore, the Detention Center Director issued an order that convicts were to stuff socks into my mouth to prevent me from talking. Some convicts used a rag for wiping the toilet to wrap the socks up and then shoved it into my mouth. I struggled hard to spit out the sock and kept clarifying the truth to them. Then they sent more than ten convicts to torment me. The corners of my mouth were cut and bleeding, and bloodstains were on the socks that were shoved into my mouth.

The director instructed convicts to take turns twisting my fingers and toes with their hands to cause me even more suffering. Such a torture would occur several times a day or continuously for 7 or 8 hours.

In cell #406, Qu Hongtao, a 30-some year old convict of Daowai District, Harbin City, frequently dug his fingers forcefully into my eyes, almost causing me to go blind. His constant digging into my eyes has caused my vision to be blurry even now. He also punched and kicked me. The center's guards usually pretended not to see it. Some might stop him but they never punished the convicts for punching or kicking the detained practitioners.

Zhou Ping, another 30-some year old convict from Harbin City, also tortured me severely. Besides twisting and striking my four limbs, he trampled on my hands and feet. About 20 or so other convicts also took turns tormenting me. The center guards did not pay any attention to it. Furthermore, a "discipline instructor" by the name of Song often instigated convicts to persecute me. At that time I had already been on a hunger strike for 50 days. The brutal torture, in addition to the earlier savage forced feeding, made my body weight drop from 180 pounds to approximately 100 pounds. 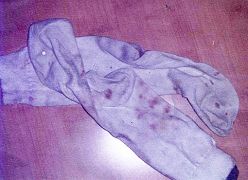 I refused to eat or drink anything from the detention center as I continued to clarify the truth to the center guards and other detainees. I let them know about the wonder of Dafa, the goodness of Dafa practitioners, and the fact that Dafa has spread all over the world. Through this, they got a better understanding about Falun Gong.

On the 60th day of my hunger strike, after innumerable inhuman tortures and savage forced feedings while near-death, I was able to walk out of there. After coming home, I learned that the national security group of the Daowai Public Security Branch forced my family to pay bonds of 3,000 yuan for my release. Family members were afraid I might be persecuted to death and so they borrowed money to pay for the bonds. We never received a receipt from the person who took our money for the National Protection Group of the Daowai Public Security Branch. Throughout the past several years of the persecution of Falun Gong, unlawful fines or bonds without receipt have been levied many times. Illegal confiscation of valuables from my home has caused much difficulty in my family's life. On two occasions, they ransacked my home without anybody from my family being there. My family has suffered greatly from the repeated arrests, ransacking of my home, and constant harassment by the authorities.

I hereby ask kind people of the world to please lend us your support in exposing and stopping this inhuman and brutal persecution that has continued these past seven years.

“Practitioners Persecuted at the Siping Jail in Jilin City”