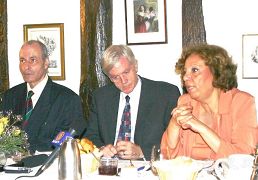 Ms. Lamperti said that upon hearing of the tragedies occurring in China, she was infuriated, and then what came to her mind was that the world must take action to expose the atrocities. She wholeheartedly supports what Mr. Kilgour and Mr. Matas have done, and expressed that she would participate in the global anti-persecution campaign. Mr. Sicurani added that human rights abuse against any individual is tantamount to abuse against human beings as a whole.

Ms. Lamperti and Mr. Sicurani immediately contemplated how to take action. Ms. Lamperti held that to get the French general public and media's support we first need to let them know what's going on (in China). Then we can consider how to take action jointly. For one thing, we may express our support for the Chinese people who don't approve of what the Chinese Communist regime has done. We may also ask French Members of Parliament to respond to the incident, as they are representatives of the people. We may also tell French lawyers this matter, so that they may support their colleagues in China, as there have been many lawyers dis-barred in China for speaking out against the government's human rights abuses.

On the other hand, we need to ask various governments in Europe to release a joint statement of condemnation. Ms. Lamperti and Mr. Sicurani suggested that a representative office of civil society be established in the United Nations to remind all member countries to fulfill their responsibilities.