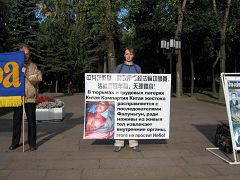 Display board reads, "Falun Gong practitioners imprisoned in prisons and labor camps are being tortured and killed, with their organs harvested for sale while they are still alive. The CCP is committing crimes against divine law." 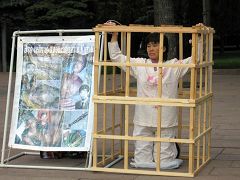 Re-enacting one of the many forms of torture used on Falun Gong practitioners in China. 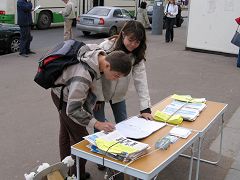 People sign a petition to support efforts to end the persecution.

Gandhi Square sits between Lomnosov Moscow State University and Friendship Street, where the Chinese embassy is located. Practitioners displayed banners reading, "Falun Dafa" and "Truthfulness, Compassion, Forbearance." Display boards were erected to expose the facts of the CCP's persecution of Falun Gong. Meanwhile, some of the practitioners put on an anti-torture exhibition. Another practitioner explained the beauty of Falun Dafa and facts of the persecution over a loudspeaker.

Passersby read the materials on the display boards and were given truth-clarification flyers. Many people signed the petition to support efforts to end the persecution.

An older person who had traveled a long distance to Moscow stood in front of the display boards, reading the displayed materials attentively. He told the practitioners, "I find it impossible to use words to describe my inner feelings. What can I do for you? I will take your materials back to those around me to let more people understand what is happening in the world." He also signed the petition.

A practitioner acting as a woman imprisoned in a cage in the anti-torture exhibition was asked how she felt. She sighed heavily, "Two years ago when I was acting as a practitioner imprisoned in a cage in an anti-torture exhibition outside the Chinese embassy, I kept shedding tears for fifteen minutes. I felt so close to China. I could sense the suffering inflicted on my Chinese fellow practitioners. It was as if I were personally experiencing the suffering. It was a type of innermost feeling that words cannot adequately describe. Hopefully, our activities can enable people to understand that the CCP is committing crimes against humanity in China. It is everyone's responsibility to uphold justice and to end the evil."

An organizer of the activities told a reporter, "We organize such activities in an attempt to have our society, government and media express concern over the current persecution in China. To keep silent about such a brutal persecution is, in fact, to tolerate evil. We feel obliged to tell people the facts so as to awaken them to their conscience and kindness. It is a comfort to see the kindness of most Russian people who unanimously condemn such persecution, torture and killing. We have heard many expressions of sympathy and support."