(Clearwisdom.net) The Chinese Communist Party's (CCP) Minister of Commerce Bo Xilai arrived in Macao in the evening of September 22, 2006, preparing to attend the opening ceremony of the Forum for Economic and Trade Cooperation between China and Portuguese-speaking Countries --- Second Ministerial Meeting, to be held on September 25, 2006. 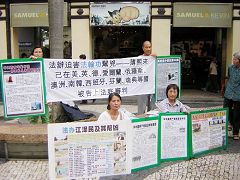 Five Falun Gong practitioners came to the busiest section in Macao on the afternoon of September 24, 2006. They unfurled a banner reading "Bring to Justice Bo Xilai-- Prime Culprit in the Persecution of Falun Gong," displayed materials, including the Nine Commentaries on the Communist Party published by the Epoch Times, for tourists passing by. When practitioners unfurled the banner, many tourists and local citizens passing by walked up to see what it was all about, and asked for materials including the Nine Commentaries.

Mr. Lin, who participated in the activities, said that during his term as Mayor of Dalian City, Bo Xilai enthusiastically followed Jiang to brutally persecute Falun Gong for the sake of political gain. Dalian City became one of the cities nationwide where the persecution of Falun Gong was the most severe. During his term as governor of Liaoning Province from January 2001 to February 2004, Liaoning Province became one of the provinces where the persecution of Falun Gong was the most severe. Masanjia Forced Labor Camp, where eighteen women Falun Gong practitioners were stripped naked and thrown into male cells in October 2000, is one of the labor camps in Liaoning Province. This March, several witnesses came forward to expose the atrocities happening in Sujiatun, a secret concentration camp in Liaoning Province, where several thousand Falun Gong practitioners were locked up to have their organs harvested while they were still alive. These heinous atrocities took place during the term of Bo Xilai. An independent investigation team formed by former Canadian Secretary of State for Asia and Pacific David Kilgour and international human rights lawyer David Matas has verified the incidents of harvesting organs from living Falun Gong practitioners to be true. Mr. Kilgour also pointed out that Bo Xilai directly participated in this matter, and requested that all countries reserve the right to deny Bo Xilai's entry.

Mr. Lin pointed out that lawsuits have been filed against Bo Xilai in several countries, including the United States, the United Kingdom, Germany, Ireland, New Zealand, Russia, Australia, Korea, Spain and Sweden. This is a human rights scoundrel who should be brought to justice.

“Japan: Radiation Protection Expert Applies for Asylum and Calls for Attention to the CCP's Persecution of Falun Gong (Photo)”