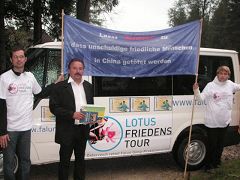 The starting place for the tour was Moenichkirchen. A local elected official, Hans Rädler, hosted the ceremony.

The practitioners will continue to tour Austria and introduce Falun Gong to more kind-hearted people.

“Council of the City of La Mesa, California: We Are Appalled and Saddened by the Atrocious Practice of Harvesting Organs from Live Falun Gong Practitioners in China”