(Clearwisdom.net) The Citizens' Commission on Human Rights (CCHR) held an international human rights exhibition at the Darling Harbor Conference and Exhibition Center in Sydney, Australia for the first time. Photos exposing the CCP’s psychiatric persecution of Falun Gong practitioners were shown at the exhibition under the title, "China’s Gulags". 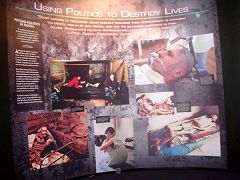 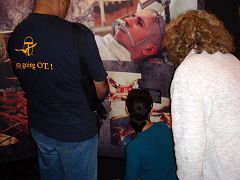 A CCHR spokesperson said when interviewed that the purpose for exhibiting the photos exposing the CCP’s psychiatric persecution was to let people know that the Nazis' crimes, techniques, and defaming methods are still occurring today. The persecution of Falun Gong is a good example, such as psychiatrists persecuting members of this group by using torture, defaming reputations and other methods promoted by the Chinese Communist regime.

CCHR was founded in 1969 with a mission to investigate and expose psychiatric violations of human rights. It has 130 braches in more than 30 countries. The exhibition caught the attention of Australian society and the visitors were more numerous than expected. It was the second stop for the global tour of the exhibition. The first was held in Los Angeles, and more will be held in several provinces and cities, including Melbourne, and west Australia, and many European countries.

This exhibition introduced that psychiatry and psychology are used to conduct genocide against specific ethnic groups and dissidents. Such genocides took place at the Nazi’s concentration camps, USSR’s Gulags and in Chinese labor camps and mental hospitals. The Gulags were forced labor camps in former USSR. The USSR’s Gulags were as notorious as the Nazi concentration camps and slaughter sites in Cambodia.

The CCHR selected two photos showing Falun Gong practitioners who had been tortured to extreme weakness and emaciation with psychiatric drugs. The photo legend stated that former USSR was not the only country using Gulags to imprison political prisoners and that they exist in China too. Chinese psychiatrists persecute hundreds of thousands of Falun Gong practitioners with electric shocks, imprisonment and drugs. They conduct intravascular injection of the drugs, resulting in swollen tongues and extensions outside of the mouth. They use electric needles with high current to shock the practitioners’ acupuncture points on the bottom of their feet, leading to extreme pain. They even apply large doses of psychiatric drugs to force the practitioners to give up their beliefs.

A CCHR spokesperson said that the Chinese regime persecutes Falun Gong practitioners. Their rights are deprived and they are tortured. Such mental torture has been used for more than 100 years. It was also used in the Nazi’s genocide of Jews. He wished more people could learn the facts from visiting the exhibition.

Regarding the recent exposure of the CCP’s live organ removal, the spokesperson said that it is horrible. Because the CCP instills such warped thoughts into people that human beings and animals can be treated the same way, those involved in these crimes are able to commit such horrible act. Many people don’t know that such things still occur today. He said one important purpose for this exhibition was to educate the public and to help more people know and pay attention to human rights.

An investigation by The World Organization to Investigate the Persecution of Falun Gong (WOIPFG) has shown that since July 1999, at least one thousand healthy Falun Gong practitioners were sent to mental hospitals to receive forced injections or take drugs. More than 110 mental hospitals in China are involved in the persecution of Falun Gong. The World Psychiatric Association planned to investigate the allegation that China abuses mental hospitals, but canceled at the last moment because of lack of cooperation from the CCP.

The following are selected cases in which the CCP usedmental hospitals to imprison Falun Gong practitioners and torture them with psychiatric drugs.

Ms. Huang Xin is a retired military examiner. She is the mother of Zeng Xiaonan, a resident of Toronto, Canada. On 2003 she was sentenced to eight-years of imprisonment in Liaoning Province Female Prison for refusing to give up her belief in Falun Gong. In the beginning of 2004, she was sent to the Liaoning Province Female Prison Hospital. At the hospital, she was injected with nerve-damaging drugs against her will, and lost most of her memory as well. She now displays slow reactions to her surroundings. She was forced to take two daily doses of Chlorpromazine hydrochloride (trade name: Thorazine. Reference: http://www.sntp.net/drugs/thorazine.htm). Because of the side effects of the high drug dose, her mind has become blurry. Sometimes she cannot speak and has difficulty moving her lower limbs.

Ms. Zhu Han, an Associate Professor at the Dalian Technology and Industry University, was arrested on August 30, 1998 for practicing in a park. She was detained in Yaojia Detention Center. Later she was imprisoned in the Dalian Psychiatric Hospital and forced to take nerve-damaging drugs. She was tortured until she was unable to take care of herself.

Mr. Su Gang, 32 years old, was a computer engineer in an instrument workshop, the Alkene Plant, Qilu Oil and Chemical Company, Zibo, Shandong Province. He was the first reported Falun Gong practitioner to have died from injections of nerve-damaging drugs.

On May 23, 2000, police and the company at which he worked forcibly took Su Gang, who was completely healthy at the time to Changle Mental Hospital in Weifang because of his refusal to renounce Falun Gong. In the hospital, Su was forcibly subjected to daily overdose-injections of drugs which, if improperly administered, can damage the central nervous system. On May 31, Su Gang's uncle, Mr. Su Lianxi, learned the news of Su Gang's detention in Changle Mental Hospital and started a hunger strike to protest the illegal detention. After nine days of torture in the mental hospital, Su Gang was sent back to his father, Mr. Su De'an. At this time, Su looked very bad: he had a dull look in his eyes and his pale face was expressionless. His reactions were slow and his limbs looked stiff. Su's body was extremely weak and in a wretched condition. On the morning of June 10, 2000, Su Gang died from heart failure.

On June 18, 2000, Reuters reported the death of this young computer engineer from Zibo, Shandong Province, who died as a result of repeated drug injections at a mental hospital for practicing Falun Gong.

Human rights organizations quoted Su Gang's father Su De'an as saying that Su Gang was healthy before the police took him away, but when discharged from the hospital, he was dull, slow, and weak and could not eat. He passed away on June 10.

After Su Gang's death, the police monitored his family. On June 14, Su Gang's father and uncle prepared to deliver an open letter to the supervisors of the Qilu Oil and Chemical Company. Security officers stopped them at the entrance to the company. Dozens of people came and interfered with them. Su Gang's father and uncle were sent to the police station for interrogation, and the police monitored their residence around the clock, making it impossible for Su Gang's family to protest his death to related agencies. Su Gang's uncle Su Lianxi was sent to a labor camp for three years for exposing the truth about Su Gang's death.

On June 23, 2001, The Washington Post published a commentary. The article condemned the Chinese Communist Party's continuing persecution of Falun Gong practitioners by forcibly sending them into mental hospitals for psychiatric "treatment," and called on the democratic governments in the world and international human rights organizations to further expose such inhumane actions.