(Clearwisdom.net) On September 20, Manfred Nowak, United Nations (UN) Special Rapporteur on Torture, spoke to the UN Human Rights Council in Geneva and described what he sees as the widespread use of torture in the People's Republic of China (PRC). During the discussion time after Mr. Manfred's speech, David Kilgour, coauthor of the Report into Allegations of Organ Harvesting of Falun Gong Practitioners in China," spoke to the audience and pointed out that the Chinese Communist regime's brutal persecution of Falun Gong is appalling. 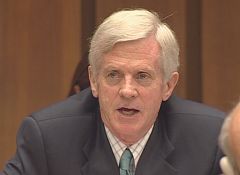 Kilgour said: "...about whether the government of China is harvesting the vital organs of Falun Gong practitioners... Human rights lawyer David Matas and I released a report in July which came to the conclusion, to our regret and horror, that the claims were indeed true. We examined every avenue of proof and disproof available to us, eighteen in all."

Kilgour said that "Falun Gong practitioners in Chinese prisons are systematically blood tested and medically examined. Because they are also tortured and abused viciously, this testing cannot be motivated by concerns over their health."

Kilgour also highlighted the fact that "Waiting times for organ transplants in China are incredibly short, a matter of days and weeks. Everywhere else in the world, waiting times are measured in months and years, pointing to the existence of a large living organ bank in China. "

The Canadian independent investigation report has raised wide attention from the international community, and many human rights organizations and renowned public figures have expressed their support to further investigation into these atrocities.