Australia: Spreading the Fa at the Cairns Cultural Festival (Photos)

(Clearwisdom.net) September 16, 2006 was the last day of the "Festival Cairns" cultural festival in Australia. The parade, which started at 6:30 p.m., was the climax of the whole activity. Falun Gong practitioners from Cairns and other cities also took part in the parade. Practitioners designed a big Falun symbol, which can rotate on an axis, for the parade. 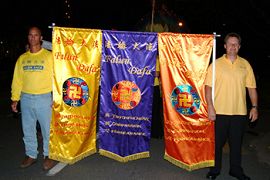 Two practitioners led the procession with a banner decorated by colorful lights and the words, "Falun Dafa." Dancing by celestial maidens was warmly received by the spectators.

Among the thirty thousand spectators, there were several tourist groups from Mainland China. One Chinese person came close to the practitioners’ float to read the words on the banner, then shouted to his friends, "It really is Falun Gong!" The practitioners smiled at them, hoping they would learn the truth of Falun Gong.

The whole parade was very peaceful. The Chinese tourists saw that the Falun Gong practitioners’ performance was welcomed and very well received, so they also smiled because they were proud of their fellow countrymen.