After the disclosure of the Chinese Communist Party's crimes of harvesting organs from living Falun Gong practitioners was disclosed, the Falun Dafa Association and the Clearwisdom website established the "International Coalition to Investigate the Persecution of Falun Gong in China (CIPFG)" on April 4, 2006. The CIPFG calls on all those who are in a position to investigate to provide evidence of organ harvesting.

Investigation lead: Liver transplant at a discount at the Neimenggu Autonomous Region Hospital

An article on page 3 of the August 3 Inner Mongolia Business News entitled "Inner Mongolia Autonomous Region Hospital Reduces Fee and Waives More than 200,000 Yuan in Medical Expenses for Liver Transplant Patient" may hint at the harvesting of living Dafa practitioners' organs, but we need to conduct an in-depth investigation to be sure.

As stated in the article, the patient's last name is Zhao, and he comes from Hohhot. Dr. Li Yonghui, a transplant expert at the Surgery Department at the Inner Mongolia Autonomous Region Hospital was responsible for the operation. Li Maoling reported the news, and Zhen Xiaoli was the correspondent.

Investigation lead: What is the source of the transplanted livers at the Meizhou City People's Hospital?

The article is tight lipped about the source of the donated liver. The patient stayed in the hospital for only 21 days, including waiting time and surgery.

A person cannot survive after the liver is removed. Where did this liver come from? Why did it cost hundreds of thousands of yuan? The surgery alone didn't cost nearly as much.

By the same token, why is it that one needs to wait only one to two weeks for a kidney transplant in China, but three to five years or even longer in the USA? The difficulty arises from searching for a "match," because the blood type, tissue type and genetic elements in the donor and recipient must match. When we mentioned the short waiting time to the doctors at the World Transplantation Congress at Boston in July 2006, many of them said that it's a very serious problem. Many people must have had organs removed against their will, because it's impossible otherwise to obtain so many matching organs from victims of unnatural deaths within such a short time.

Even if the hospital obtained the organs from the deceased, matching donors and consent from the donor's family is still required. It is impossible to keep the process quiet. Live organs from unexplained sources usually come from people in prisons and labor camps. The authorities cooperate with staff in hospitals, committing inhuman crimes in the process. One person is thus murdered so someone else can live, and a profit of hundreds of thousands of yuan is made off the blood and life of the victim. We hope insiders can continue to help us expose the dark truth behind the collusion between labor camps, prisons and hospitals in brutalizing innocent Falun Gong practitioners and other victims.

The patient is a 50-year-old man who entered the hospital on July 8, 2006. He was diagnosed to have a large malignant liver tumor on the right lobe and metastasis in various parts of his body. The patient cannot undergo conventional surgical removal of the tumor. The outcome of chemotherapy and radiotherapy are poor. Several experts at the hospital studied his case and agreed that only a liver transplant could save the patient's life. After completing preparation work, a donor liver was obtained on July 29, 2006 and an orthotopic liver transplant was performed. The patient has safely passed the rejection period and has not developed any post-surgery infections. He has recovered and left the hospital yesterday.

A liver donor was found within about 20 days. In the USA, by comparison, it takes three to seven years to find a matching liver donor.

Article "Boss Pays Hundreds of Thousands of Yuan for Jiaoling Worker to Receive Liver Transplant" on page A07 of the Nanfang Daily newspaper" on August 29, 2006

51-year-old Chen works at the Pengye Water and Electricity Construction Company in Jiaoling County. He was diagnosed with late-stage liver disease in early July this year. A quick liver transplant was required to save his life. Chen Huipeng, representative of Meizhou City People's Congress said after he learned of Chen's condition that the company would cover all medical expenses."

The surgery began at 9:00 a.m. and ended at 1:30 p.m. Xie Qiang, head of the Cardiac Surgery Department, performed the procedure.

Mr. Shi comes from Xintai City, Shandong Province. He went to the Anzhen Hospital in Beijing in May 2006 where he was diagnosed with perivalvular leak, cardiac hypertrophy, whole heart failure, pulmonary hypertension and other serious problems. His life expectancy was less than one year. Medication no longer worked. The only way to prolong his life was to replace the heart. Mr. Shi arrived at Xinhua Hospital Affiliated with Dalian University at the end of July 2006 to wait for a matching donor.

a matching heart was found in about ten days, between the end of July and August 3, which suggests that the Chinese Communist Party (CCP) system has a gigantic live organ bank. 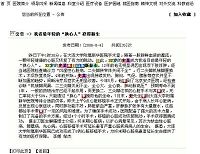 The surgery began at 10:00 a.m. and ended seven hours later. It is probable that Xu Ning, head of the Thoracic Surgery Department, carried out the procedure.

Mr. Li was diagnosed with terminal stage lung disease, idiopathic terminal-stage pulmonary fibrosis, and normal surgery would not help correct the condition. Only a lung transplant would save his life. Staff at the Xinhua Hospital Affiliated with Dalian University went through numerous resources and finally obtained a donor lung.

: the phrase "went through numerous resources and finally obtained a donor lung" suggests that the CCP has a system coordinating live organ banks throughout the country. When we prove this beyond a shadow of a doubt, it will confirm that the murder of Falun Gong practitioners takes place throughout China, and is in fact genocide. 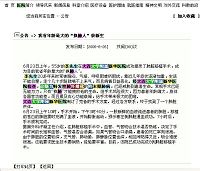 3. Two patients received a heart and a lung from the same person at the Xinhua Hospital Affiliated with Dalian University

CCTV [China Central Television] 10 broadcast a detailed report on two patients on May 26 and 27, 2006 who received a heart and a lung from the same person at the Xinhua Hospital Affiliated with Dalian University.

54-year-old Mr. Song comes from Tong County, Beijing and received a "donated" heart from a 24-year-old person at the hospital last year, on March 14, 2005.

39-year-old Ms. Ren comes from Zhangjiagang, Jiangsu Province. Mr. Song and Ms. Ren together received a heart and a lung transplant at the hospital last year, on March 14, 2005. The heart and lung were "donated" from the same 24-year-old person.

Mr. Song and Ms. Ren returned to Dalian City on March 12, 2006. They met with officials, medical experts and medical staff from all over the country at an organ transplant discussion forum.

Since this 24-year-old person provided both a lung and a heart for transplant, s/he must have been healthy! S/he must have died, because both organs have been removed. Why did s/he die? For what reason was s/he killed? Even a criminal has the right to live and exercise freedom of choice. It would be difficult to imagine a death row inmate "coincidentally" satisfying the organ matching with two persons.

We must also consider the fact exposed earlier this year that Falun Gong practitioners have their organs harvested on a large scale.

This type of surgery - removing organs from living individuals - is murder. All people who were involved in the organ harvesting, the surgery, and the two patients who received the organs are perpetrators and accomplices to this murder.