Taiwan: Practitioners in Pingtung Clarify the Truth to People from All Walks of Life (Photos)

On September 1, 2006, practitioners visited former Senior Presidential Advisor Chiou Lien-Hui and told him about the tragic persecution of Falun Gong in Mainland China and the CCP crime of harvesting organs from living Falun Gong practitioners and cremating their bodies. When he saw the photographic evidence, Mr. Chiou immediately expressed support for the coalition and strongly condemned the CCP's atrocity. 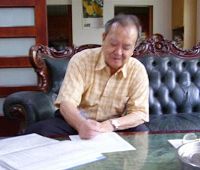 The practitioners gave Mr. Chiou a copy of Zhuan Falun and told him it was the great law of the universe and promoted the philosophy of cultivating Truthfulness-Compassion-Tolerance, which improves health and morality. Mr. Chiou was very pleased to receive the book. 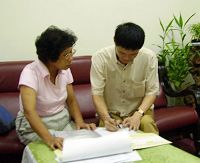 The practitioners also visited Mr. Gao Chao-lu, Director of Lin Luo Clinic. Mr. Gao has always been very concerned about the persecution and has followed the developments on the Internet. He gained a clear understanding of the evil nature of the CCP and signed to support the Coalition. He also encouraged the practitioners.

The practitioners gained full support from all the representatives and the head of the village. These officials were grateful to learn the truth and agreed to tell the local people to be sure to get a confirmed source of organs if they ever need to get an organ transplant. This will prevent them from unknowingly assisting in a crime.