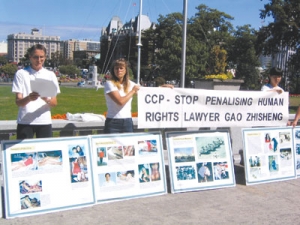 The demonstration to raise awareness of China's alleged persecution of Falun Gong members.

Recently a small crowd gathered around posters displaying gruesome images of bloody, dismembered people at the steps in front of the legislature.

A handful of Victoria Falun Gong practitioners organized the demonstration to raise awareness of China's persecution of human rights lawyers and the alleged harvesting of human organs from imprisoned Falun Gong members there.

Guo Ting Guo, the first Chinese lawyer to openly defend practitioners of Falun Gong (a spiritual movement banned in China since 1999), was present at the small demonstration.

He has been living in Canada as a refugee since late 2005, after his home was raided and his law firm was taken away by Chinese officials, he said.

"We have done nothing wrong," Guo said, referring to himself and other Chinese human rights lawyers who are finding themselves under attack from Chinese authorities.

"Lawyers are being told not to defend Falun Gong," said Marie Beaulieu, a local Falun Gong practitioner. "If even lawyers cannot defend those people, where can they go to appeal for justice?"

Westerners need to be aware of the slaughter that is occurring in China, said Beaulieu, as she motioned towards gory pictures of what she maintains are tortured Chinese Falun Gong practitioners.

The report concludes, "We believe that there has been and continues today to be large-scale organ seizures from unwilling Falun Gong practitioners. The allegations, if true, would represent a grotesque form of evil, which, despite all the deprivations humanity has seen, would be new to this planet."

Kilgour said China should put an end to organ harvesting immediately, or it will risk jeopardizing the success of its Olympic Games in 2008.

Falun Gong, also known as Falun Dafa, was first taught publicly in China in 1992. It combines meditation with Tai Chi-like exercises. The discipline has spread quickly in China and in other parts of the world.

"Chinese tourists walk past our display quickly to avoid it," said Beaulieu. "Because in China people are told by the propaganda machine to persecute Falun Gong."