After a week's gloomy weather, it was sunny that day. The display boards and banners set up in front of a water fountain looked exceptionally solemn and dignified. Practitioners in yellow and blue costumes demonstrated the five sets of Falun Gong exercises to the audience.

There were a lot of tourists at the square, and many of them came to view the display boards and listen to practitioners' explanation of the facts about Falun Gong. After hearing the truth, they were very concerned about the Chinese regime's atrocities and signed the petition to support the activities protesting against the persecution one after another. 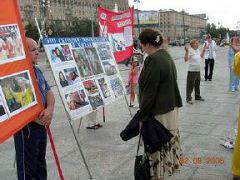 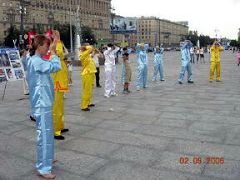 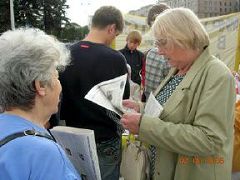 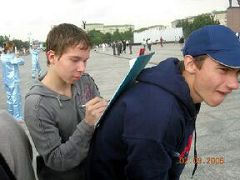 Another lady stood in front of the display boards for a long period of time. From her appearance, we could tell that she sympathized with the Falun Gong practitioners being persecuted. After practitioners took the initiative to explain the facts about Falun Gong to her, she said that her husband is Chinese, but both of them didn't know the facts about Falun Gong in the past. She asked for all the material in Chinese, saying that she would take the material to her husband. She expressed her appreciation to the practitioners time and again.

At times, there were some passersby who were deeply poisoned by evil doctrines of Communism. To answer the questions they raised, practitioners would patiently explain the facts to them with a peaceful mind, hoping to awaken their conscience and righteous thoughts.