Illinois, USA: Practitioners Participate in the Labor Day Parade in the City of Naperville (Photos)

(Clearwisdom.net) Naperville is the the fourth largest city in Illinois, located south of Chicago. It enjoys the reputation of having a high employment rate, a low crime rate and excellent schools. On September 4, 2006, Naperville hosted the Labor Day Grand Parade, which marked the end of summer. 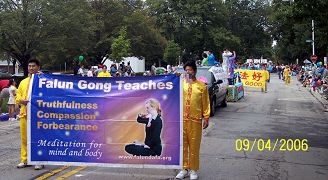 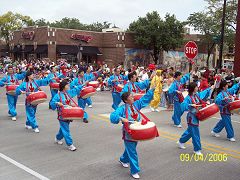 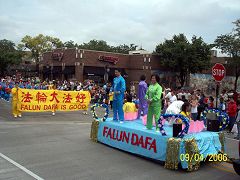 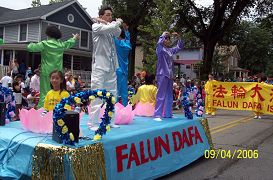 Demonstrating the harmonious and peaceful exercises

The local government of Naperville issued proclamations for Falun Gong in both 2001 and 2002. Practitioners have participated in the Labor Day Parade since 2002. This year, the theme of the parade was "There's No Place Like Naperville." In addition to demonstrating the Falun Gong exercises, practitioners prepared the "Tang Dynasty Drum Dance," bringing the charm and joy of Chinese culture to the event. Several women practitioners in Tang Dynasty costumes distributed "truth-clarification" materials along the parade route. They drew the attention of countless spectators, and thousands of fliers were distributed to the local people. When the float passed by the VIP seats, the parade marshal announced: "This is the Falun Dafa team, also known as Falun Gong. It teaches 'Truthfulness-Compassion-Forbearance.' Welcome to Naperville!"

The pleasant living environment of Naperville has attracted a large number of Chinese people over the past few years, especially people from Mainland China. The great majority of Chinese spectators were pleased to accepted the Chinese-language version of the Nine Commentaries on the Communist Party along the parade route.

It has rained every year on the parade since the practitioners have participated, but this year, the heavy rain clouds suddenly dispersed in the morning. The beautiful blue sky and brilliant sun above Naperville helped practitioners demonstrate the beauty of Falun Dafa, clarify the truth, and call upon the conscience of the people.

“Norway: "I Believe It Is True, and What You Do Is Important." (Photos)”