(Clearwisdom.net) On September 1, Singapore Falun Gong practitioners held a press conference at the Speakers’ Corner in the Hong Lim Park. Practitioners from the U.S., Canada, Taiwan, Malaysia, Thailand, Japan, Australia and Hong Kong also participated in the conference. Several media outlets, including The Strait Times, attended the meeting, in which Dr. Wang Yuyi discussed the many kinds of unfair treatment against Falun Gong practitioners in the court. 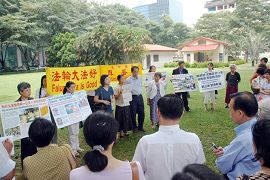 For displaying a banner which read "July 20 Hunger Strike to Protest the Chinese Communist Party’s Inhumane Persecution of Falun Gong", on July 20, three practitioners were charged by Singapore police for "harassment by displaying insulting writings." The Subordinate Courts started to process this case on August 28.

Dr Wang discussed what have happened at the court in the past week: The court strictly limited Falun Gong supporters who wanted to attend the court hearing. While there were more than 100 supporters who went to the court, security only allowed 6 to 8 to enter. The court refused to give to the defense a tape which was used as a major piece of evidence by the police, which is against common practice. The court violated court rules by allowing police witnesses to stay inside the courtroom during non-testifying hours. Court security withheld the defense lawyer's major evidence, and the court refused to accept the "2004 UN Investigation Report" as evidence. The largest newspapers in Singapore, the Straits Times (English newspaper) and Lianhe Zaobao (Chinese-language newspaper), published reports with significant errors on the practitioners' words. The practitioners’ belongings related to Falun Gong, including books and other materials, were withheld at the entrance to the Supreme Court Building. The security guards also took down their passport numbers and contact numbers. The practitioners’ lawyer Mr. Ravi said that withholding Falun Gong practitioners’ books in the Supreme Court is tantamount to withholding Christians’ bibles, which is a serious form of discrimination

The persecution of Falun Gong practitioners who practice the universal principles of "Truthfulness, Compassion and Forbearance" has lasted for more than 7 years, and the Chinese Communist Party (CCP) has tortured, detained, and murdered practitioners. Most recently, it has been confirmed that the regime has been harvesting organs from living Falun Gong practitioners for sale since 2000. The world is shocked by the brutality and evil nature of the persecution, and many individuals and governments have condemned the atrocities and expressed their support for Falun Gong. In addition, more than 13 million Chinese have openly withdrawn from the Chinese Communist party or its affiliated organizations. Under these circumstances, the practitioners hope that the Singapore government will stop persecuting Falun Gong and drop all charges against innocent practitioners.