, Falun Gong began in China in 1992 as a mind and body improvement system based on the principles of Truth, Compassion, and Tolerance; and

, Falun Gong has attracted over 100 million people from more than 60 countries; and

, since coming to Virginia in 1996, Falun Gong Practitioners have offered numerous free workshops and seminars to teach Falun Gong to the local community; and

, Falun Gong is a non-political, peaceful and beneficial practice that is being persecuted in China where more than 100,000 of its followers have been arrested, detained, tortured or killed; and

, Falun Gong is designed to preserve precious human traditions such as loyalty, unselfishness, and honesty, and the Portsmouth Family is pleased to join with the many good friends, practitioners, and followers of Falun Gong in extending our best wishes.

in Portsmouth, and urge our citizens to become more knowledgeable in Falun Gong and to participate in activities on Falun Gong Day.

In Witness Whereof, I have hereunto set my hand and caused the Seal of Portsmouth, Virginia to be affixed this fourteenth day of July, two thousand six. 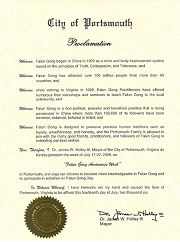 “Investigation Leads: The Close Cooperation Between Hospitals and Prisons, and Other Leads”