Oakland, California: Clarifying the Truth at the Mid-Autumn Festival (Photos)

(Clearwisdom.net) On August 26, 2006, the annual Mid-Autumn Festival was held in Oakland, California's Chinatown. Several members of the Divine Land Band went to the festival to clarify the truth and pass out copies of the "Nine Commentaries on Communist Party." Practitioners also set up a booth to pass out materials. 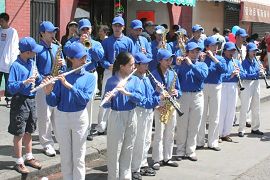 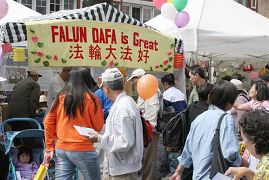 Learning the facts at the practitioners’ booth

More than 200,000 mostly Chinese people attend the Oakland Mid-Autumn Festival every year. The performance by the Divine Land Band attracted many people. When the band was performing, many people came and took materials. An older couple didn’t want to leave when practitioners were taking a break, and stayed to wait for the performance.

A gentleman commented on the performance, "It is wonderful." He said that he heard about Falun Gong, and he saw protests at the Chinese Consulate. He was shocked when he learned about the organ harvesting from living Falun Gong practitioners. He hopes the persecution of Falun Gong stops as soon as possible.

Mr. Zhang, a member of the Divine Land Band, said that he attends the festival with his family every year. Unlike previous years, however, this year he came to perform.

Mr. Zhang said, "We use music, a form of art that everybody likes, to clarify the truth of Falun Gong. Falun Gong, such a peaceful group, is persecuted in China. We want to make more people aware of the persecution in China."

Practitioners said the activity was very successful, and they hope to participate again next year.

“Canada: Bringing the Beauty of Dafa to Communities (Photos)”