Minghui/Clearwisdom correspondent He Yu reports: Southwest Hospital in Chongqing City is suspected of harvesting organs from living Falun Gong practitioners and it is on the second list of investigation targets for the Coalition to Investigate the Persecution of Falun Gong (CIPFG).

Recently, the CIPFG received many reports about the Southwest Hospital in Chongqing City. Some of the leads are provided as follows:

Beginning on May 7, 2006, Zhou Yongkang, the minister of Public Security, held a secret, two-day meeting at the Wanzhou Party School in Chongqing City. After the meeting, large groups of Falun Gong practitioners were transported in special fully closed trucks used in the judicial system, to Sanhe Labor Camp and Changtan Prison in Fenshui, Wanzhou. Tiemen Farm (a tea farm) in Zhong County is emptying its food storage to prepare for this purpose. These large prisons are located in the mountains 300 km from Chongqing City, where there are huge underground military structures built earlier by the Chinese Communist Party (CCP). There are numerous ultra large-scale military hospitals in Chongqing City, including the Southwest Hospital, Daping Hospital, and Xinqiao Hospital, and there are large medical research facilities in the Third Military Medical University engaging in studies of the human body.

A kidney patient from Kaijiang County, Sichuan Province revealed on June 20, 2006 that Southwest Hospital in Chongqing City has access to an abundant and guaranteed organ supply for use in transplants. Patients staying at this hospital quickly receive matching organs for whatever organ is in need of replacing. This patient underwent kidney transplant surgery on July 7, 2005, and ten other people also received kidney transplants at the same time. 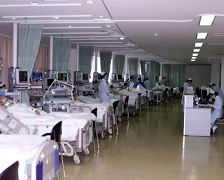 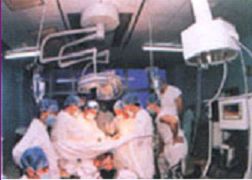 On July 19, 2006, CIPFG investigators called a patient in Chongqing City who received a liver transplant at Southwest Hospital in Chongqing City in early 2006. The patient's pseudonym is Hou Li, and the recorded telephone conversation is as follows:

Investigator: Hello, is this Hou Li?

Investigator: Are you Hou Li?

Investigator: Hello, I just want to ask you about something. Did you have [liver transplant] surgery? I have a family member in Chongqing City, her liver is in very poor condition and [she has] liver cirrhosis. The doctor said she needs a liver transplant. I'm helping her to get the money [for the surgery], and I also have to help her get some information. How are you feeling now after the surgery?

Hou: Where are you?

Investigator: I have a family member who needs an operation, and I'm really anxious. I heard someone saying that some people get great results after the surgery, and some people don't feel very well. We asked a doctor and he said you got a good result after surgery and we could ask you about the situation. We can feel more confident about it through conversing with you.

Hou: There is absolutely no problem with surgeries at Southwest Hospital, you have to believe it.

Investigator: How old are you?

Investigator: What kind of illness did you have?

Hou: Hepatitis B and liver cirrhosis.

Investigator: Are there lots of people who receive liver transplant at the hospital?

Hou: [Laughs] Lots and lots and lots, sometimes they do several [transplants] a day. This Southwest Hospital Affiliated with the Third Military Medical University is huge. The condition of the inpatient wards at Southwest Hospital is excellent. The surgery building is equipped with air conditioners. They can do kidneys, hearts and livers. I'm speaking the truth and I won't tell any lies, not like during the Great Leap Forward [a Chinese Communist movement from 1958 to 1962, a period when lies and exaggerations were the norm and millions of deaths were result]. Things like this cannot be made up. Come and check it out for yourself.

Investigator: How much does it cost?

Investigator: So how much did you pay?
Hou: I paid around 200,000 yuan including [post-surgical] exams. Right now I'm doing great.

Investigator: Do we still need to pay the liver donor?

Hou: No. The initial visits, surgery, liver and inpatient treatment are all included.

Information about waiting time and the surgery time

Investigator: How many days did you have to wait after you were admitted to the hospital ward before you could have surgery?

Hou: I waited for more than ten days after I went in.

Investigator: Did you wait at home after the initial exam, or did you stay right at the hospital and wait there for a dozen days for surgery?

Hou: I stayed right at the hospital and waited for a dozen days, and then I had surgery.

Hou: My blood type is A.

Investigator: So it takes a dozen days' wait for blood type A. My family member is also type A, I don't know how long she'll have to wait.

Hou: As long as one month, but if you are lucky, you'll only wait a few days.

Investigator: How long is the surgery?

Investigator: Did you wait for the liver after your abdomen was opened, or did they bring in the liver before they opened you up?

Hou: I don't know about the specifics, it seemed like the liver was prepared beforehand.

Investigator: Did you receive surgery in the daytime or at night?

Hou: I was scheduled to get it at night. The Southwest Hospital does surgeries 24 hours a day, day or night.

Investigator: How many people had liver transplants around the same time as you?

Investigator: Did all of you get it on the same day or on different days?

Hou: Not on the same day, [some were] separated by a few days.

Investigator: Which doctor did you ask for at the hospital?

Hou: All of the doctors are good at the Liver and Gallbladder Department.

Hou: Any doctor at the Liver and Gallbladder Department of Southwest Hospital is fine. I had Doctor Yang, Professor Yang and his team did it for me.

Investigator: We heard that professor Bie Ping [at the Liver and Gallbladder Department] is also very good. Is there a doctor called Bie Ping?

Hou: Yes, yes, yes. His professional skill is very good, he does it very well. Professor Yang, professor Liu¡KLots of experts and professors are here. Each surgery needs seven or eight people. I can't explain it over the phone; you guys should come and see it for yourself.

Investigator: Do you know about the health condition of the person who provided the liver to you? We heard your donor was in his/her 20s. Was it a man or a woman?

Hou: I don't know about that, and I never ask about it. I'm OK with it as long as I get a good one. I guess [the donor] was young, how could they use an old one for me? I'm of this age myself. Southwest Hospital is such a large hospital; I believe they get all the best donors. The outcomes of their transplant surgeries are all very good, regardless of whether the patient is male or female, young or old.

Investigator: We heard that one hospital did three liver transplants in a month, and two of the patients died, I'm really worried¡K

Hou: It's not an issue at Southwest Hospital. It's well-known in the country. You can relax if you come here.

Investigator: Was the liver donor alive or dead?

Hou: [Laughs] Alive, of course I want a live one, it is good only if the heart is still beating. How can a dead one work?

Investigator: Oh, so you said [the liver donor] was alive?

Investigator: Can we ask the hospital ourselves for a young and healthy donor organ?

Hou: Yes. You can talk face-to-face with the doctor in charge of it. You must believe that it's young and healthy, how can they use an old one?

Hou: [Laughs] Whole liver transplant. My entire liver was removed. My family looked at the liver that was cut out.

Investigator: So, you had live whole liver transplant?

Hou: [Laughs] I'll stop here, you can go to the hospital and check it out yourself. You must believe in this Southwest Hospital. You can be 100% confident as soon as you transfer money to the hospital's bank account. (Hangs up)

In March 2006, the shocking crime of the Chinese Communist regime's harvesting of living Falun Gong practitioners' organs was exposed. It was revealed that inside Sujiatun Concentration Camp, several thousand Falun Gong practitioners, men and women, young and old, had their organs and corneas removed while they were still alive and sold before their bodies were tossed in crematoriums inside the concentration camp and burnt to destroy evidence. It has been revealed that at least 36 concentration camps similar to Sujiatun exist in China! This horrifying crime began in late 2000 inside labor camps, prisons, concentration camps and hospitals throughout China and has lasted up until now.

On April 4, 2006, the Falun Dafa Association and the Minghui/Clearwisdom website jointly established the Coalition to Investigate the Persecution of Falun Gong in China (CIPFG). The coalition is bringing together international forces of justice to completely and thoroughly investigate the Chinese Communist regime's crimes in the persecution of Falun Gong practitioners, to end this brutal persecution that has lasted seven years.

After more than two months of investigation and collection of evidence, on July 6, 2006, David Kilgour, former Secretary of State of Canada in charge of Asia Pacific Affairs and a senior member of the Canadian Parliament and David Matas, an international human rights lawyer, stood before the Canadian media with their "Report Into Allegations of Organ Harvesting of Falun Gong Practitioners in China." The report verifies the allegations that the Chinese Communist regime has been harvesting organs from living Falun Gong practitioners and selling them for transplants in order to achieve the goal of genocide against Falun Gong. The Chinese Communist regime made tremendous profit and dragged countless people in the medical field, business field, political field, military field and judicial field into this bloody crime. Mr. Matas called the live harvesting of Falun Gong practitioners' organs "a grotesque form of evil¡Knew to this planet."

“Investigation Leads: Prisons and Forced Labor Camps in Jilin Have Drawn Blood From Falun Gong Practitioners Over the Past Years”