(Clearwisdom.net) Mr. Liu Shijun, born on January15, 1963, was a practitioner in Jixi City, Heilongjiang Province. He worked in the Seafood Department of Jixi City. He lived in the Power Plant Dormitory in the Jiguan District of Jixi City. His ID number was 230302196301155030. He graduated from Heilongjiang Province Seafood School, majoring in freshwater foods. He passed away on March 3, 2005. He was 42 years old. 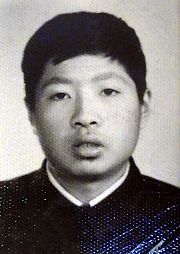 In 1994, Mr. Liu Shijun suffered from cirrhosis of the liver. At that time, he was told that his condition was too serious to be treated and that he would die. Due to his illness, he had trouble even walking on his own.

On July 20, 1999, the persecution of Falun Gong started. Mr. Liu was detained in Dongfeng Police Station in the Jiguan District of Jixi City. In August, he went to Beijing in order to appeal on behalf of Falun Gong. Policemen illegally arrested and tortured him. They forcefully kicked him in the back, and he was in great pain. In September, policemen from Dongfeng Police Station went to Beijing to escort Mr. Liu and another practitioner, Zheng Wenguang, back to their housing quarters. Mr. Liu and the other practitioner were not allowed to wear a coat or winter pants. They came back wearing thin clothes and slippers. They were detained in the No.2 Detention Center in Jixi City for 81 days. During their detention, Liu Shijun experienced terrible pain in his liver and could not even stand up.

In the detention center, policemen from the Jiguan District took Mr. Liu to a special disciplinary unit and forced him to do hard labor. For example, he had to dig a vegetable storage bunker, clean roofs, and clean pig sties. After his release, local policeman Han Junqiang, members of the Residential Committee, and managers at his workplace often harassed him by phone or went to his home and threatened him. This made it impossible for him and his family to lead a normal life.

In the summer of 2000, Liu Shijun, his wife and their one-year-old daughter were forced to become homeless to avoid harassment. During this time when the family moved from place to place, he had to do various odd jobs in order to survive. However, he was reliable and respected by those who worked with him.

Recently, with the support of Mr. Liu's relatives, his daughter was able to go to school, but his wife and daughter are still struggling to survive.

People and related organizations or departments responsible for Mr. Liu's persecution include: