Canada: Practitioners Conduct SOS Car Tour to Call for an End to the CCP’s Atrocities (Photo)

(Clearwisdom.net) From August 14 to 18, 2006, four practitioners from Toronto conducted an SOS car tour in Northern Ontario and three cities of Quebec. The whole journey was nearly 4000 kilometers and passed through thirteen cities. They met members of local city councils, provincial parliaments, the federal parliament, and mayors. They also conducted a series of press conferences and exposed the CCP’s atrocities of harvesting organs from living Falun Gong practitioners. 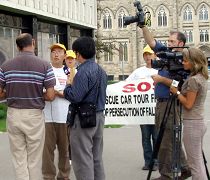 In each location, they introduced the Canadian independent investigation team’s "Report into Allegations of Organ Harvesting of Falun Gong Practitioners in China" to members of city councils parliaments, and media. They exposed the CCP’s atrocities and called on local people, government, members of councils and parliament, and media to help and support Falun Gong practitioners, condemn and stop CCP’s atrocities.

The people, government officials, members of councils and parliaments, and reporters who knew the fact were indignant about the CCP’s crimes. People could not imagine that such brutal atrocities are occurring today in the 21st century. Human rights are not confined to country or race. When human rights are trampled, anyone can stand up to condemn and help stop it.

In Thunder Bay the mayors of Elliot Lake and Temiskaming Shores met with Falun Dafa practitioners and listened to their introduction. In some cities, mayors and council members were out of town, but their executive secretaries and assistants met with the practitioners. They were touched after hearing the facts and said they would transfer the truth-clarification materials to the mayors and members of the city council. They also encouraged the practitioners to explain the facts to everyone.

In Quebec, French is the official language. An assistant to a Member of Parliament in Val- d’Or was not good in English. After listening to the practitioner’s explanation through a translator, the assistant said, "Never heard of such thing. It’s horrible. We will extend your explanation to the MP." In Thunder Bay, the assistant to Michael Gravelle, Member of the Provincial Parliament, had tears in eyes after listening to the practitioners’ explanation and said, "You are doing good. Because of language and culture, we did not know Falun Gong before and why it is persecuted. We keep in touch and I will help you." Before the practitioners departed, he shook hands with each of them and presented them with city badges.

A reporter in Hearst interviewed the practitioners for one hour and learned in detail about the Canadian Independent Investigation Team’s report and the grace of Falun Dafa. The reporter listened to practitioners’ explanation of the persecution in China and expressed sympathy for the practitioners. In Thunder Bay, three mainstream media came to the press conference and were shocked at the CCP’s atrocities. On the next day, they all carried the news of the SOS car tour.

On the trip, practitioners experienced the Canadian people’s kindness. People who knew the facts were indignant and some had tears.

A policeman stopped the practitioners’ car on the highway and checked their identifications. The practitioners explained the facts to him. He listened for more than 20 minutes and said, "It’s horrible. I never heard of it. I"ll let my colleagues know about this." He asked for a whole set of the truth-clarification materials.

The most touching event was in Timmins. The practitioners were told that a media in Quebec need a photo of the car tour urgently. Due to time constraints, they could not process the photo and send it via the internet. They asked a photographer at a local photoshop to take the photo. After listening to the practitioners’ explanation of the facts, she was very supportive. She selected a background scene for the practitioners and took the photo. She did not accept a penny but promised to send the photo to that media organization.