(Clearwisdom.net) The 19th European Track and Field Championship concluded on August 13 in Goteborg. Fourteen hundred athletes and two thousand reporters from 49 countries participated in this grand event. During the championship, Falun Gong practitioners’ simulation of organ harvesting atrocities was very eye-catching. Human rights issue in China once again received great attention from the public and media. 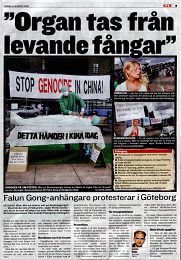 On August 12, Goteborg Evening Daily (GT, one of the major Swedish newspapers) published a full page report on the Chinese Communist Party’s (CCP) atrocities of organ harvesting. Below is the translation of an excerpt of the article:

Blood, corpse and organs were seen at the Queen Square. A simulation was held to show the public how organs are being seized from Falun Gong practitioners in China. Vevika E. participated in this activity, she told the reporter:

A surgeon opened the chest of a mannequin and took out a heart. It was very vivid.

A Chinese woman with half-swollen face sat in a chair, many parts of her body were "bleeding" while a policeman was torturing her repeatedly.

The allegation of harvesting organs from living people was first brought up in this Spring.

This [organ harvesting] can probably explain why the organ waiting time in China is much shorter than other countries. Goteborg resident Ms Johnson signed her name on a petition. She said: "It is very cruel. It immediately reminds me of the Nazi concentration camps during World War II."

On their information table, two independent investigation reports were displayed.

Living People Are Being Used as Organ Suppliers

Former Canadian Secretary of State for Asia Pacific David Kilgour and human rights lawyer David Matas stated in their report: "The allegations, if true, would represent a grotesque form of evil which, despite all the depravations humanity has seen, would be new to this planet."

Edward McMillan-Scott, Vice President of the European Parliament, stated: "The condition of prisoners in China is increasingly well-known but it is only in recent months that a particular mistreatment - of Falun Gong practitioners - has come to light, namely the selection of prisoners for 'reverse-match' organ and tissue transplants, leading to their deaths."