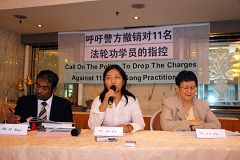 Three Falun Gong practitioners were charged by the police for conducting a peaceful protest outside the Chinese Embassy on July 20, and the trial was set to start on August 28. On August 17, however, the Subordinate Courts suddenly dropped the charge against Ms. Chen Pei Yu, and the Immigration and Checkpoints Authority wanted to deport her back to China. Chen's attorney Mr. Ravi said it wasn't in accordance to the law to deport anyone involved in a lawsuit. The law prohibits those involved in lawsuits to leave the country. It would be defiance of the law. When the deportation decision was questioned, the charge against Ms. Chen was suddenly dropped. The intention was nothing but to deport her. Mr. Ravi said his request of having Ms. Chen as a witness had been granted, and he hoped the Immigration and Checkpoints Authority would extend her visa until the end of the trial.

Mr. Ravi said the court had been unfair to Falun Gong practitioners. While he was working on a similar case, the prosecutor took the initiative to give the defendants the VCD used as evidence. However, in the case of Falun Gong, the prosecutor wouldn't give the attorney the VCD in spite of his repeated requests. The prosecutor was afraid the VCD would be published on the Internet.

Practitioners introduced Falun Gong, its wide spread and the persecution. They played a videotaped interview of the two Canadian independent investigators who came to the conclusion that the allegations of mass-scale organ harvesting of Falun Gong practitioners in China are true.

After learning that the charges against Falun Gong practitioners were related to the visit of CCP official Li Lanqing when he came to receive an honorary Ph.D. degree from the National University of Singapore on July 4, and that Li was the head of the 610 Office (an agency in China dedicated to the persecution of Falun Gong) Mr. Ravi asked how a murderer could be honored by the National University of Singapore. As a graduate of NUS, he felt ashamed and wanted to withdraw his graduation certificate. He put on a yellow bracelet to protest the shameful action of the university. He decided to tell his classmates and all students of NUS to put on yellow bracelets. Many alumni of NUS followed his call immediately at the press conference.