(Clearwisdom.net) On August 16, Falun Gong practitioners held a press conference in front of the British Columbia Parliament Building in Victoria, announcing the start of a van tour through the area to clarify the truth about the persecution. During the van tour, practitioners will visit government officers and call upon every Canadian to condemn the crimes of harvesting organs from living Falun Gong practitioners. 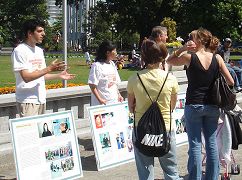 On July 6, 2006, an independent Canadian investigative group consisting of former Secretary of State for the Asia Pacific region and Member of Parliament Mr. David Kilgour, and human rights lawyer David Matas, released a report following their two-month investigation into allegations that vital organs are being seized from Falun Gong practitioners in China. At their press conference on Canada's Parliament Hill, Mr. Matas called the harvesting of organs from living Falun Gong practitioners an evil that "we have yet to see on this planet."

Some tourists from France, Tanzania and Scandinavia were shocked when they learned these facts. An American lady said that she had never heard about it. She suggested that practitioners urge the United Nations to conduct a complete investigation. Many people accepted our materials, and many students viewed the photos we displayed that expose the truth of the persecution.

A newspaper interviewed the practitioners and another media called to schedule an interview later.

“Toronto: Members of the Divine Land Band Clarify the Truth in Chinatown (Photos)”