(Clearwisdom.net) On July 31, 2006, Ms. Pei Shuhua was sent home from the Jilin Provincial Hospital. All who saw her could not believe their eyes and were utterly shocked by the sight. Ms. Pei was so severely emaciated that no one would have been able to recognize her if they were not told that she was indeed Pei Shuhua. 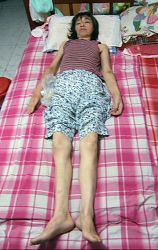 Before being persecuted, Ms. Pei Shuhua was a tall lady at approximately 1.7 meters, with a healthy build and a weight of 160 pounds. After her release Ms. Pei's skin was bruised and purple, her hair grayish white, and she was severely emaciated. There was barely any flesh on her, and even her veins appeared to be shriveled. No more than a layer of skin covered her 60-pound skeleton. She could not urinate properly, nor could she sit or stand properly. She has lost all ability to move and needs help to turn, to sit up, and to eat.

Ms. Pei Shuhua, 55 years old, worked in the Shuangyang District Hospital in Changchun City. After obtaining the Fa in 1998, she has led her life strictly according to the requirements of Dafa. She worked diligently and neglected her own personal gain and interests. She would rush to complete any work for herself and others and displayed tremendous physical and mental improvements obtained from cultivation. However, after the persecution of Falun Gong began on July 20, 1999, she suffered numerous illegal arrests, persecution, beatings, and imprisonments.

On July 20, 1999, in order to clarify the truth about Falun Dafa, Ms. Pei traveled to Beijing to appeal to the government. However, she was detained and sentenced to forced labor. She was sent to a forced labor camp near the Shuangyang District Public Security Division Bureau. In 2001, she was sentenced to another year of forced labor for distributing truth clarification materials. However, a year later, she was labeled as "untransformed" and was sent to the brainwashing center in Xinglongshan, Changchun City. Refusing to give up her belief, she was straight away sent to a forced labor camp without any justification or formal procedures. There were no written documents provided as to how long she was to be imprisoned, etc. A little more than a year later, in September 2004, she had became so severely ill from the persecution that the authorities agreed to release her unconditionally

In September 2005, while distributing truth clarification flyers, Ms. Pei was again arrested and detained. In order to resist the persecution, she went on a hunger strike, refusing food and water. Only after she became severely ill five days later was she released unconditionally.

In November 2005, while clarifying the facts about quitting the Chinese Communist party to local elementary school students at the Quyi Shiyan Elementary School, she was reported to the authorities and was arrested by the Tongyang Road Police Station in Shuangyang District. Ms. Pei went on another hunger strike, refusing food and water. Five days later, the police station transferred her to the Third Detention Center in Changchun City. However, due to her very poor health and having being diagnosed with severe heart disease and almost no pulse, she was rejected by the detention center.

The detention center officials threatened, "We don't believe that we can't "transform" you!" As a result, she was sent to the Provincial Reeducation through Labor Hospital where she was brutally persecuted with force feeding and injections. Tubes were brutally inserted down her esophagus to force feed her.

By March 28, 2006, Ms. Pei had been tortured to the brink of death. She was due to appear at the People's Court in Shuangyang District, Changchun City. After more than five months on a hunger strike, the severely ill Ms. Pei was carried into the courtroom in bedsheets for a show trial. Her entire body was wrapped in cloth, including her hands and face. Only her hair, which was now almost all white, could be seen. A medical person holding an oxygen tank stood beside her. Unable to sit, she could only lean by the police car. Her family members demanded bail be set for her medical treatment, but the Courts replied that this could not be done for Falun Gong practitioners. Even visiting was prohibited. After emergency treatment, doctors discovered that she was totally unable to move, so the trial was forced to be postponed.

In May of 2006, a clandestine trial was held in the Provincial Reeducation through Labor Hospital and Ms. Pei was illegally sentenced to three years of imprisonment.

While at the Provincial Reeducation through Labor Hospital, Ms. Pei requested to be unconditionally released and continued her hunger strike. Between May and July 31, 2006, she did not eat a single crumb. In the end, the hospital refused to keep her, and she was transferred to the Jilin Provincial Hospital. At the Jilin Provincial Hospital, doctors diagnosed her as "untreatable" and as a last resort, they were forced to inform Ms. Pei's family members to take her home on July 31, 2006.

“Cultivating in the Celestial Band”

“Mr. Fu Xuedan Passed Away in Grief after his Mother was Sentenced to Forced Labor”