By the Mayor of the City of Frankfort

To all to Whom These Presents Shall Come:

, Falun Dafa, also known as Falun Gong, is a traditional Chinese meditation practice which aims to improve the mind, body and spirit of the practitioner through conscious self-improvement, upgrading of the moral character, gentle movement and meditation; and

, the practice of Falun Dafa, based on the principle of truthfulness, compassion, and tolerance, has enabled millions of people worldwide to deal with stress and anxiety by upgrading their morality and improving their physical and mental well being and tranquil exercises; and

, since its introduction to the public in 1992 by Mr. Li Hongzhi, the practice has benefited more than 100 people in more than seventy nations worldwide; and

, the persecution of the practitioners of Falun Dafa is an attack on basic human rights and should not be tolerated anywhere in the world.

Done at the Municipal Building, in the City of Frankfort, Kentucky this 11th day of August in the year of our Lord, two thousand and six. 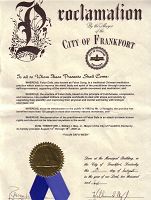 “The Cruel Torture and Agonizing Death of Hao Yingqiang (Photos)”