On August 16, Falun Gong practitioners held a forum in the main conference hall of the Ethical Society of St. Louis, on the theme of the illegal organ harvesting from Falun Gong practitioners in China. The Chinese Communist Party's (CCP) atrocities of organ removal from living people caught the deep concern of the local media and the medical community. 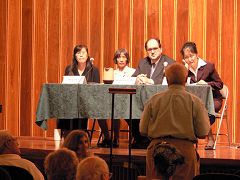 Audience members ask questions one after another

In the forum, the opinion editor for The Epoch Times newspaper, Mr. Stephen Gregory gave a speech entitled, "Making Sense of a New Form of Evil." He referred to the Canadian independent investigation report, "Report Into Allegations of Organ Harvesting of Falun Gong Practitioners in China:" "The allegations here are so shocking that they are almost impossible to believe. [They] represent a grotesque form of evil which, despite all the depravations humanity has seen, would be new to this planet." The independent investigation report concluded that the allegations are true and that crimes of large-scale removal of vital organs from living Falun Gong practitioners are occurring in China.

Mr. Gregory talked about the CCP's harvesting of body organs from death row inmates for the past 40 years and compared it with the CCP's harvesting vital organs from living Falun Gong practitioners today. Practitioners are detained without legal procedures and are killed not as executed criminals, but simply for their organs. It is genocide. The persecution of practitioners is conducted in secret and their family members don't know their plight, even after they are killed.

Mr. Gregory also gave an in-depth analysis of the brutal persecution of Falun Gong, which was initiated out of jealousy by Jiang Zemin and CCP.

A local Falun Gong practitioner, Ms. Li Huagui, narrated her experience of suffering when she was illegally imprisoned, tortured, forced to give up belief, intimidated and forced to attend brainwashing sessions in Sanshui Labor Camp, Guangdong Province, China. In 2001, all practitioners imprisoned in the labor camp were required to have a complete physical examination, including an examination of their heart and other internal organs. Other non-practitioner inmates were not examined. It was likely the labor camp's preparation to harvest organs. Sobbing, Ms. Li called on the conference attendees: "Rescue Falun Gong practitioners! At this moment, there are practitioners who are being killed for their organs."

Dr. Wenyi Wang also gave a speech and provided evidence and investigative leads concerning the CCP's large-scale organ harvesting from living Falun Gong practitioners. She mentioned two witnesses, "Annie" and "Peter" who came overseas to disclose the CCP's live organ removal. Annie's former husband was a doctor involved in harvesting organs from living practitioners. Peter was a veteran reporter and learned about the situation from secret channels. In many Chinese websites about organ transplantation, there were many advertisements about organ transplants, claiming that patients could find suitable donor organs within one week. This indicated that there was a large number of available donors. In reviewing official data from the CCP, organ transplantation grew very fast since 2000, which coincided with the persecution of Falun Gong. The Canadian independent investigation team also noted this unexplained rapid growth. Such a large number of donors cannot be explained from the number of executed death row inmates. There is a huge disparity between the number of executed prisoners and the number of organ transplants done in China. In phone conversations with Chinese hospitals, many doctors openly admitted that the organs were from Falun Gong practitioners.

After the three speakers spoke, the audience asked may questions. Some audience members asked if the International Criminal Court could be requested to stop the genocide. Some people wanted to know how to get more information and follow-up reports. Some asked how to help stop the atrocities. The three speakers answered the audience in detail.

Attention from the media and medical circles

On August 15, a reporter from the health column of the principal local newspaper, the St. Louis Post-Dispatch, interviewed Dr. Wang. In this special interview, Dr. Wang introduced the background behind her shouting at the White House during Chinese President Hu Jintao's visit, and exposed the CCP's crimes of live organ removal. The reporter asked Dr. Wang what she would like say to residents of St. Louis. Dr. Wang said she hoped that more people would come to know about the situation and help to stop the genocide. The reporter and an editor said after the interview that the live organ removal was "inconceivable" and "unimaginable."

On the morning of August 16, the well-known talk show host Charlie Brennan of KMOX Radio Station invited Dr. Wang to participate in his program. The program is popular and has a large listening audience. In the live broadcast, the host and Dr. Wang talked about the CCP's crimes of organ harvesting from living Falun Gong practitioners. Charlie Brennan asked if any of the organs were sold to St. Louisans. Dr. Wang answered yes, if there were patients going to China for organ transplants.

The CCP atrocities of organ removal from living Falun Gong practitioners caught the attention of the medical community. One doctor said that it was a hot topic and that all the doctors in his hospital were talking about it. On the evening of August 15, the famous medical ethics professor, Ira Kodner of Washington University Medical School, invited Dr. Wang to have a 2-hour talk with approximately 30 students, on the subject of the CCP's live organ removal. The professor and students were very concerned about the brutal persecution occurring in China. They felt it inconceivable for Chinese doctors to commit such a deed. Dr. Wang explained that the CCP's control over China for the past more than 50 years has led to the degradation of social and moral values. In today's China, money is highly valued and many doctors ignore morals and ethics. This is one of the reasons that such crimes can occur in China.