On August 17, a seminar on organ harvesting was held at the New South Wales State Parliament. The seminar was hosted by Phil Glendenning, director of the Edmund Rice Center. Former Canadian Secretary of State, David Kilgour and Edward McMillan-Scott, Vice President of the European Parliament, were the keynote speakers. The parliament hall was packed with state representatives, lawyers, doctors, professors and representatives from human rights groups. Some people stood throughout the session to listen to the discussion, as all seats were taken. The exposed Chinese Communist Party's (CCP) atrocities of organ harvesting shocked the audience. Many asked questions to learn further details, and a lawyer brought out suggestions on how to stop the evil practice. 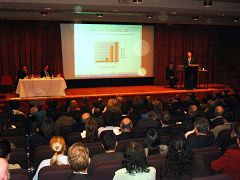 The parliament hall was packed

At the beginning of the seminar, Gordon Moyes, member of the New South Wales Upper House, stated that he was not surprised when he saw the report by David Kilgour and human rights lawyer David Matas. He said that he had been to China a number of times and had met some members of underground churches. Mr. Moyes said that tens of thousands underground church members are also being detained and persecuted. He believes that there is a need to establish a worldwide organization to support and promote human rights. He also said that the Australian government sacrificed human rights in order to develop trade with China.

Vice-President of the European Parliament: The CCP's Organ Harvesting Atrocities Amount to Genocide

In his speech, Edward McMillan-Scott, Vice President of the European Parliament, said that he had been to China in 1996 and he met reporters, dissidents, diplomats and two Falun Gong practitioners during his most recent trip to China earlier this year. He learned that human rights and democracy in China have become worse than 10 years ago and the CCP has intensified its persecution against religious groups and dissidents while corruption has become even more rampant. He said that he met two Falun Gong practitioners and listened to their account of their personal experience during the persecution. According to Cao Dong, one of the two practitioners, Mr. Cao's friend disappeared during detention and later Cao had a chance to see his body with holes in it [left by organ removal operations]. Cao Dong was arrested after meeting with Mr. McMillan-Scott, who has since been working very hard to rescue him.

Edward McMillan-Scott believed that the atrocities revealed by Kilgour's and Matas' report constitute genocide. He said: "In Hong Kong, I met a friend of my family who is a journalist, and he said: 'Yes, a friend of mine, he needed a new liver, and he rang the hospital in Shenzhen, and they said yes, come over next week, it's not a problem.'"

In Australia, people need to wait an average of 7 years to get a liver.

McMillan-Scott said that Kilgour and he came to Australia and New Zealand to expose these atrocities. They hope that democratic countries including UK, Canada, US, Australia and New Zealand can operate cooperatively to stop this. He stated that any organization or individual would conclude that the Chinese Communist regime has committed genocide after reading the report.

Former senior Canadian MP David Kilgour reviewed the investigation report and their investigation approach. Kilgour said that the Chinese Communist regime waited 3 or 4 weeks to respond to the report and the only refute from the government was that two province names in the report were miss-quoted. Kilgour believed that such empty refute indicates that the evidence provided in the report is solid and the crime of harvesting organs from Falun Gong practitioners on a large scale does exist. Since the regime started to persecute Falun Gong, from 1999 to present, there are more than 40,000 cases of organ transplant operation without verified organ donor. Assuming that every donor provided two organs, it still means that at least 20,000 people died unnaturally.

Kilgour told the audience that their report has received great attention from the public. For example, he has recently received a news release by the US Kidney Foundation which advised its members not to go to China for kidney transplants.

After listening to Kilgour's speech, one seminar attendee could not help shouting, "This is a crime!" She said that her daughter is a kidney doctor, and modern medical technique can use artificial kidneys without ethical problems.

Trade Should Not Sacrifice Human Rights

When some expressed concern that criticizing China for human rights will jeopardize trade relations, Kilgour said that the trade deficit with China and Australia is $5 billion, $13 billion for Canada and even more for the US. While Canada and the US are more reliant on the Chinese economy, this fact doesn't prevent the two countries from condemning China for its bad human rights record.

Kilgour said that he didn't believe that China will cancel contracts of buying natural gas if Australia condemns its human rights problems. Edward McMillan-Scott said that trade is very important to every country, but no country shall sacrifice human rights for trade. He said that he is optimistic, even though the current human rights situation in Communist China is shocking and saddening. He said that the dramatic change in Poland and other Eastern European Countries started in churches and people's awakening to beliefs.

At the seminar, a lawyer suggested that everyone in the meeting room should write to the Prime Minister about this issue and encourage family members and friends to participate in this meaningful effort. She said that if the PM receives tens of thousands of letters on this issue, he would sense the urgency of this issue and realize that he should do something about it.

At the seminar, two Falun Gong practitioners shared their experiences of the persecution. Sydney practitioner Wang Juan spoke on behalf of her mother who had just fled from China. Ms. Wang's mother was illegally detained for 3 years for practicing Falun Gong and went through a lot of physical and mental torture. In addition, Wang's sister was also detained for her belief in Falun Gong. Australian citizen Jane Dai recounted how her husband was tortured to death by the Communist regime. At that time, their daughter was only 9 months old. Mrs. Dai's hair turned gray overnight upon hearing the heart-breaking news. Her sister-in-law was also sentenced to a labor camp shortly after her husband's death.

The discussion portion of the seminar was very dynamic and the whole seminar was extended for more than half of an hour. After the seminar, many stayed to continue their discussion. A lot of people thanked the seminar sponsors for organizing this successful event and left their contact information in order to receive updated information on this topic. Meanwhile, they also said that they would share this information with people around them and consider all possible means to help end the persecution.