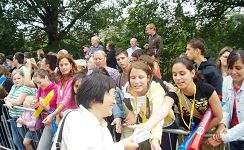 Many spectators want the bookmarks 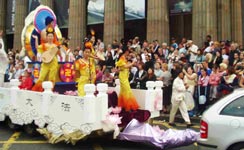 The Falun Gong section of the cavalcade included banners, a flag dancing formation, a float with exercise demonstrations and flying angels, drum players and a hanging picture of the Falun emblem. Practitioners on the float demonstrated the fivesets of Falun Gong exercises. On the float there were also a few young practitioners in flying angel costumes holding ancient musical instruments. The audience kept applauding and waving to the float as it went by. The graceful moves of the drummers also won waves of applaud from the audience.

The cavalcade of the Edinburgh International Festival is one of the largest parade shows in Scotland. More than three thousand people from all over the UK and Europe took part. Last year it attracted about one hundred eighty thousand spectators.

“Bulgaria: Two Radio Broadcasts about Falun Gong in the City of Varna (Photo)”