Falun Dafa practitioner Li Yequan, from Heilongjiang Province, has been on a hunger strike to protest his illegal imprisonment for more than nine months. His situation is extremely critical. On June 19, his family members went to Suihua Labor Camp and the Labor Camp Bureau in Heilongjiang to ask for his release. The bureau and the labor camp both tried to dodge the request by refusing to meet with them. 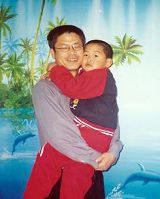 Li Yequan and his son together

Let's take a look at some of the past crimes committed at Suihua Labor Camp: Daqing bleaching assistant plant engineer Zuo Guoqin, 37 years old, was not allowed to study the Fa or practice the exercises at Suihua Labor Camp. Every day four people monitored him, and he was forced to read massive amounts of material that slandered Master and Dafa. Feeling devastated by this kind of spiritual torture, his condition worsened day by day. His whole body developed a severe state of edema. He could not eat food, he was weak, and his life was endangered. However, he was still not released. When he was finally released, he died just a few days after returning home. 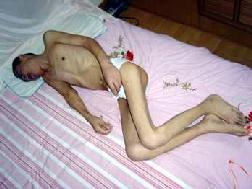 An Senbiao, extremely thin and persecuted to the brink of death

A Falun Dafa practitioner at Daqing Second Oil Extracting Factory, An Senbiao, 38 years old, suffered such tortures as being burnt, being pricked with needles, having his mouth filled with laundry soap, being shocked with an electric baton, and being sexually abused at Suihua Labor Camp. On July 13, 2005, a family member took home An Senbiao, who had been persecuted nearly to death. In former days when An Senbiao was healthy, his body weight was 62.5 kilograms (138 lb.), but now he was only 42.5 kilograms (94 lb.). Because he was tied-up and handcuffed for long periods of time, both of his arms are straight and stiff. He cannot bend his arms and has extreme difficulty taking care of himself.

Attached are the pictures of Suihua Labor Camp

Captions for the above pictures:

(3) Building for the imprisonment of other prisoners