(Clearwisdom.net) Celebrations and parades were held in different places in Thailand to celebrate the Queen's birthday on August 12, 2006. Falun Gong practitioners participated in the community parade and celebration performances. The sponsor of the activities issued an award to the practitioners. 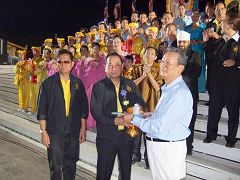 The sponsor presents an award to a Falun Gong practitioner

On the afternoon of August 12, a Falun Gong contingent composed of flags, dragon flags, celestial maiden dancers and waist drums joined other community groups and set off from Bangkok Bridge, marching toward Big Cup Shopping Mall. On the way, vigorous drum beats, colorful flags and elegant dancing, and celestial maidens spreading flowers, attracted attention of people on the streets. They highly praised the wonderful performances. Falun Gong practitioners held in both hands big colorful lotus flowers which were filled with small paper-folded lotus flowers, each attached a book mark with a message about the virtues of Falun Dafa. They presented these lotuses to people watching on the streets.

On the evening of August 13, 2006, practitioners participated in a royal celebration held in the square. They performed a dragon flags dance, celestial maidens dance, waist drum performance, demonstration of the five sets of exercises, and chorus. They displayed the beauty of Falun Dafa and their wonderful performance won a round of applause from the audience.

After the performance, the sponsor presented an award and had a photo taken with all practitioners. They shouted in chorus, "Falun Dafa is Good."

“Queensland, Australia: Falun Dafa at the Nambour Festival on the Sunshine Coast (Photo)”