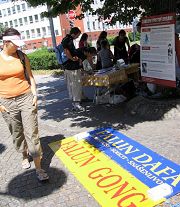 According to a witness, who released the information to the newspaper The Epoch Times, since 2001, the CCP has harvested living Falun Gong practitioners' organs for profit in concentration camps and cremated the bodies to hide the evidence.

The practitioners told people that the CCP has persecuted Falun Gong according to the directive, "destroy them physically, bankrupt them financially and defame their reputation." Seven years have passed; however, Falun Gong not only still exists, but also is known about and supported by more and more people. Falun Gong has spread to more than eighty countries, and the book Zhuan Falun has been translated into more than thirty languages.

Many people signed the petition to express their support for "Truthfulness, Compassion and Forbearance," the principles of Falun Gong, and to oppose the persecution.

"I'm from Ceske Budejovice. I've seen you in the local newspaper and it's great to see you on the street in person."

A woman who looked at the truth-clarification information and pictures couldn't help trembling with shock and indignation. She said of the CCP, "How come these kinds of people exist? How come they do such things? I really can't understand it."

Indeed, it's sad to see the truth of the persecution. "The important thing is that we see that the CCP seems to have become a strong power in the world. However, these are people in power whose hands are full of the blood of innocent, kind people. This is not a trivial matter," a young man added.