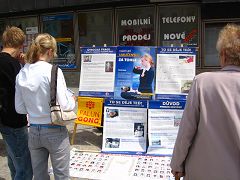 Czech practitioners set up banners and posters along a street and distributed truth-clarifying materials to let people know about Falun Gong and the brutal persecution in China, including the recently revealed organ harvesting from living practitioners. Many pedestrians stopped to read the displayed information, acquired copies of Falun Gong materials and signed a petition condemning the Chinese labor camps and the horrific organ harvesting. Quite a few of them had been in contact with local practitioners in the past and thus knew the truth of the CCP's persecution of Falun Gong.

Two days later, the practitioners held a seminar in Havlickuv Brod, during which they taught attendees the Falun Gong exercises. People who were interested in learning the practice also bought Falun Gong books and exercises instruction VCDs.