On July 6, 2006, the independent investigation group, consisting of former director of the Asian Pacific Division of Canada's Foreign Affairs Ministry and member of Parliament, Mr. David Kilgour, and human rights lawyer, David Matas, released an independent report, following their two-month investigation into allegations that vital organs are being seized from Falun Gong practitioners in China. At the press conference on Canada's Parliament Hill, Mr. Matas called the harvesting of organs from living Falun Gong practitioners an evil that has never happened on this planet before. 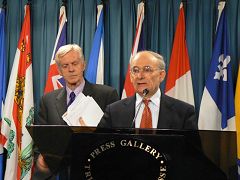 Mr. Matas and Mr. Kilgour at the press conference

After a two-month investigation to prove or disprove 18 various kinds of evidence, the two investigators concluded, "Based on what we now know, we have come to the regrettable conclusion that the allegations are true. We believe that there has been and continues today to be large scale organ seizures from unwilling Falun Gong practitioners." 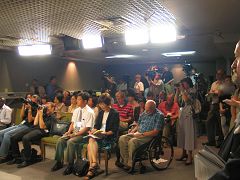 Mr. Matas: Harvesting Organs from Living People--the Evil that Has Never Happened on This Planet Before

The report pointed out that according to public reports in China, between 2000 and 2005, there were about 60,000 organ transplant operations in China. In the six years before the persecution of Falun Gong, there were 18, 500 transplant operations in China. This means that "that the source of 41,500 transplants for the six-year period from 2000 to 2005 is unexplained." The report pointed out: "Where did the organs come from for the 41,500 transplants? The allegation of organ harvesting from Falun Gong practitioners provides an answer."

In the conclusion, the report said: "We have concluded that the government of China and its agencies in numerous parts of the country, in particular hospitals but also detention centres and 'people's courts', since 1999 have put to death a large but unknown number of Falun Gong prisoners of conscience. Their vital organs, including hearts, kidneys, livers and corneas, were virtually simultaneously seized involuntarily for sale at high prices, sometimes to foreigners, who normally face long waits for voluntary donations of such organs in their home countries."

The evidence that the report provides includes: the witness of the ex-wife of a surgeon who has removed corneas of more than 2000 Falun Gong practitioners, and the transcript of telephone investigations.

At the press conference, Mr. Kilgour told journalists that he had some very astonishing evidence. Mr. Kilgour read part of the transcript of a telephone investigation for the reporters.

The Persecution is Different than the Previous Ones; Human Rights Organizations Should Take Different Methods to Investigate It

In the conclusion, the investigators said: "Our conclusion comes not from any one single item of evidence, but rather the piecing together of all the evidence we have considered. Each portion of the evidence we have considered is, in itself, verifiable and, in most cases, incontestable. Put together, they paint a damning whole picture. It is their combination that has convinced us."

The Credibility of the Report

The Chinese Communist Party (CCP) has denied the allegations that they are harvesting organs from living Falun Gong practitioners. Mr. Matas said that he wants to tell the Chinese government that if it denies the allegations, it can carry out all the suggestions made by them in the report and ask itself if the conclusion of the report is true or not. Mr. Mata also said that they also noticed that the laws cannot be realized in China, including the Chinese Constitution, which promises democracy.

Mr. Matas said that if the CCP can stop persecuting Falun Gong, allow investigators to visit prisons and labor camps, and stop killing and harvesting organs from living Falun Gong practitioners, then the charge would not exist.

Some reporters thought that the organ harvesting in China is unbelievable. Mr. Kilgour said that it was difficult for people to believe it. But, people will be shocked after they finish reading the report. Mr. Matas said it doesn't mean that the organ harvesting doesn't exist. Before it happened, who would believe that the Nazi Holocaust and the September 11 Attack could happen.

The Witness of Victims

An engineer from Montreal, Wang Xiaohua, had been tortured in the Second Labor Camp in Yunnan because he refused to renounce his belief in Falun Gong.

Wang Xiaohua testified: "In January 2001, the labor camp had comprehensive physical examinations for all the Falun Gong practitioners jailed there. The examination included electrocardiograph, X-ray, liver function check and blood work. Usually, criminals in the labor camp cannot enjoy this benefit. The policemen told me that the examination was a special benefit that the CCP offered to practitioners. But now, looking back with a knowledge of the CCP's organ harvesting, I feel horrified."

A policeman from the National Security Brigade in Wuhua Police Department had threatened Wang Xiaohua that they would take all the practitioners to a desert and kill all of them. Wang Xiaohua said: "I thought it was just a threat at that time, but now I realized that he was referring to the death concentration camp."

Gan Na, a citizen from Toronto, had been jailed in detention centers, a labor camp and mental hospital for practicing Falun Gong. When she was jailed in Xin'an Women's Labor Camp in Beijing, she and other Falun Gong practitioners had a comprehensive physical examination. Gan Na said: "I felt it strange at that time. Because we were forced to do heavy labor more than 10 hour a day, and the labor camp didn't treat us as human beings, so why did they offer us a comprehensive physical examination?"

After the organ harvesting was exposed, Gan Na recalled that in 2000 and 2001, a lot of Falun Gong practitioners from all over the country went to Beijing to appeal for justice for Falun Gong. Many of them refused to tell the police their names [Note: Due to the CCP's policy of implicating and putting pressure on family and work units, many Falun Gong practitioners refused to reveal their names when they were arrested for appealing]. They were taken away and people lost contact with them. Gan Na said: "In 2000, I met a practitioner from Xinjiang. Her husband and son were jailed in Beijing, and she lost contact with them. Two years later, she called me and said that she still had not heard from her husband and son."

Large-Scale Organ Harvesting is a Crime against Humanity

The report said: "Organ harvesting of unwilling donors where it is either systematic or widespread is a crime against humanity." "Governmental, non-governmental and inter-governmental human rights organizations with far better investigative capacity than ours should take these allegations seriously and make their own determinations whether or not they are true."

The report said: "Article 3 of the United Nations Protocol to Prevent, Suppress and Punish Trafficking in Persons, bans, among other practices,... the removal of organs. Governments should request the relevant agency of the UN (we would suggest the UN Committee Against Torture and the UN Special Rapporteur on Torture), to investigate if the government of China has engaged in, or is engaging in now, in violations of any of the terms of Article 3. If so, the necessary steps to seek a remedy should be initiated with deliberate haste."

In the report, the investigators recommend: "Until the Chinese law on organ transplants is effectively implemented, foreign governments should not issue visas to doctors from China seeking to travel abroad for the purpose of training in organ or bodily issue transplantation. Any doctor in China known to be involved in trafficking in the organs of prisoners should be barred entry by all foreign countries permanently."

The report said: "The repression, imprisonment and severe mistreatment of Falun Gong practitioners must stop immediately."

On the morning of May 8, 2006, a news conference was held on Capital Hill in Ottawa, Canada. Former chairman of Canada's Sub-Committee on Human Rights of the Committee of Foreign Affairs and former director of the Asian Pacific Division of Canada's Foreign Affairs Ministry, Mr. David Kilgour, along with the well-known international human rights attorney Mr. David Matas, announced that they would jointly lead the efforts to investigate the organ harvesting from living Falun Gong practitioners by the Chinese Communist Party.

Conservative Party Member of Parliament, Rahim Jaffer said, "The stand of the Canadian government is to encourage independent investigation to verify the allegations of live organ harvesting."

On June 2, the two investigators wrote to the Chinese Embassy, requesting entrance into China to conduct an independent investigation.

On June 23, Officers from Chinese Embassy met with Mr. Kilgour, and refused their request to enter China to conduct an independent investigation.