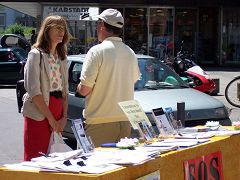 A woman is greatly interested in the incidents in China

Many passersby were shocked to hear about the brutal persecution still ongoing in China. They listened intently to the practitioners' explanations and signed a petition calling for the organ harvesting from living Falun Gong practitioners by the CCP to stop.

An elderly man was deeply shaken and could barely believe that something like this was really going on. Without hesitation he went to the booth to sign the petition. He also took some of the informational materials, thanked us greatly and wished the practitioners great success in their efforts.

A middle-aged woman talked for a long time with one of the practitioners. She could hardly believe that humans can stoop so low as to cut the organs from one of their own live countrymen/women. She was rather skeptical in the beginning about being able to make a difference in stopping the crimes committed by the CCP. But, she still took a lot of information to give to her friends.

A singer from Poland, who performs in a theatre in Saarbrucken told us that she had heard about a Chinese farmer on public television news who was forcibly relocated. He received only a fraction of the compensation they had promised. After he publicly spoke about this on television, the authorities had him beaten up. The result was a broken cervical vertebrae and paralysis.

The singer was highly indignant about the arbitrariness and brazenness of the CCP. She also told us that she went to a theatre performance in Beijing and Shanghai. A Chinese co-worker had arranged the trip and at first sight she saw a modern metropolis. But, when the group went for a walk they were shocked to see, not far from the few modern high-rise buildings, a residential area that showed the great poverty of the common Chinese folk. This just did not agree with the CCP propaganda they had heard.

The singer realized that they were only shown a cover and that the CCP, which lives by lies and brutality and abuse of its people, will not have a future. The downfall of communism is predictable and the Chinese people will again have freedom of belief. Finally, she encouraged us to continue with our efforts.

A man from the former German Democratic Republic agreed that terrorism and collusive state politics is common to all communist countries. But, he was certain that the time for communism to continue to flourish has passed. He praised the Falun Dafa principles of "Truthfulness, Compassion and Forbearance." As a Christian, he was of the opinion that respect should exist among the different religions, and that the world needed definitely tolerance.

An astonishing number of passersby had already heard much about the criminal activities of the CCP and therefore were disgusted with the communist regime.

“After Being Missing Six Years, Wang Xiangshang Returned Home and Died at the Door”

“Organ Harvesting in China: A Report by Edward McMillan-Scott, Vice-President of the European Parliament”