Minghui Summer Camp started on the first day of the summer vacation on a farm in Tongsiao, Miaoli County, Taiwan. 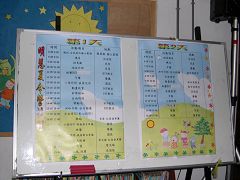 The mayor of Tongsiao Town, Wu Hengchao, and Secretary of the Women's Association, Chang Yumei, supported the camp. During the two days, children learned the Falun Gong exercises and principles. They also learned to make artworks and kites. They read stories and poems, had parties, and played games. Besides gaining knowledge, the children also learned how to cooperate with each other.

Making art was very popular. The children molded animals with clay and made kites out of trash bags.

The children learned the principles of "Truthfulness-Compassion-Forbearance" from a cartoon video. They learned that they need to be good kids at home, and at school they need to respect teachers and be friendly to classmates. After the cartoon, the instructors gave the children survey forms so that they could check how many of their daily behaviors didn't match up to the principles of "Truthfulness-Compassion-Forbearance" so that they could correct themselves later.

This activity was sponsored by Falun Gong practitioners and the Hongsiao Children Association in Tongsiao. The activities took place in an outside classroom on a farm, where children could enjoy the beauty of nature and scenes of the countryside while learning. Everyone benefited from the camp. Before the end of camp, the children promised each other that they would meet again at the same place next year.