During the afternoon of July 1, 2006, the 139th birthday of Canada, Falun Gong practitioners who had just participated in the grand parade in downtown Montreal were invited to participate in the community activity held on the banks of the St. Lawrence River in Verdun, Montreal, Canada. They performed folk dances, demonstrated the Falun Gong exercises and introduced Falun Gong's wonderfulness. They also exposed the brutal persecution of Falun Gong by the Chinese Communist Party (CCP). 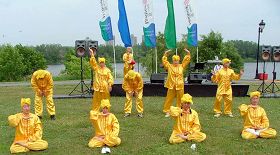 Demonstrating the five sets of exercises

Falun Gong practitioner Ms. Zhu Ying said that practitioners have taken part in the grand activities in Verdun for three consecutive years. The local residents have developed a deep understanding of Falun Gong. "Though the time for this year's activity conflicted with the Canada Day Parade, we still rushed here immediately after participating in the Canada Day Parade. We hope to bring the beauty of Falun Dafa to more people," said Zhu Ying. 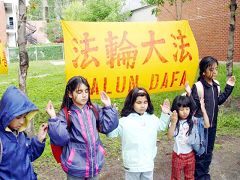 A man who was with the woman who spoke to the practitioners said, "I know the CCP is evil. You must keep on." 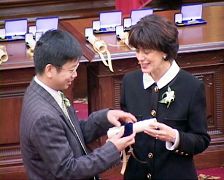 Falun Gong practitioner and Verdun resident Mr. Chen Ruqing (left) awarded "Outstanding Citizen" by Quebec Province for Self-sacrifice For the Sake of Others

According to Zhu Ying, Verdun residents' support for Falun Dafa resulted from the power of the truth about Falun Dafa. Ms. Zhu Ying, who lived in Verdun Borough, was arrested and imprisoned for 33 days when she returned to China to visit her relatives in May 2001. Through this incident that happened around them, the Verdun Borough councilors and many local residents learned about the CCP's persecution of Falun Gong. Another local resident, Falun Gong practitioner Mr. Chen Ruqing risked his life to rescue a little girl from a hole in the ice on March 9, 2002, and was awarded the title of "Outstanding Citizen" by the Quebec Province. He became the first Chinese in Quebec history to win this honor.