The Falun Dafa Association and Minghui/Clearwisdom website launched the "Coalition to Investigate the Persecution of Falun Gong in China (CIPFG)" and are collecting evidence of CCP atrocities against Falun Gong practitioners from all sources. Please find below recently discovered information. We sincerely hope that people who are aware of relevant facts will step forward and expose the cruel killing of Falun Gong practitioners, as well as the collusion among forced labor camps, prisons and hospitals in China, and thus help stop the persecution.

The Chinese Communist Party (CCP) stayed silent for a few weeks after the Sujiatun Concentration Camp was exposed. On April 11, 2006, though, an official from the Liaoning Provincial Thrombus Hospital of Integrated Chinese and Western Medicine (where the Sujiatun Concentration Camp was hidden) publicly denied the existence of the concentration camp. He further denied the harvesting of organs from living Falun Gong practitioners and the cremation of their bodies.

The CCP's denial does not surprise people. The CCP has always denied persecution while torturing its enemies, and it has always denied its abuse of labor camp detainees and its violations of human rights. Facts speak louder than words, and more and more people see clearly the wickedness of the CCP. Many people recounted stories of their families or friends who received organ transplants. We publish these stories here.

1. Ms. Shen said, "My brother-in-law Sun received a kidney transplant in the summer two years ago at the Jiedaokou Hospital of the Military Region in the Wuchang District, Wuhan City. We heard that eleven people received transplants that day. The whole procedure took twenty one days, including hospitalization, tissue match and surgery. The doctor told us that if we had sent our money earlier, my brother-in-law could have undergone surgery earlier. Many patients were waiting for kidney transplants at the time."

2. Ms. Li said, "My cousin received a kidney transplant at the Wuchang District Military Police Hospital two years ago. The tissue match and surgery only took a few days. We had heard then that many patients were undergoing this type of surgery."

3. Ms. Chen said, "My brother-in-law received a liver transplant at the Tongji Hospital in Hankou, Wuhan City before the 2006 Chinese New Year. The tissue match and surgery took only five days."

The patients' families said that it used to take a long time to receive an organ transplant, varying from six months, one year, three years, to five years. It's quite rapid nowadays. A patient can have the surgery as soon as the hospital gets the money. It's not hard to deduce that what happened at the Sujiatun Concentration Camp also takes place in Wuhan City.

Here we want to call out to the public: Learn more about organ transplants through families and friends. Expose and suffocate the evil!

While I spoke with a family member once he said, "We have the largest prison right here in Jiutai." I asked, "Where is it?" He answered, "It's in Manka." I asked, "Who is held there?" He said, "They are all Falun Gong practitioners. This is absolutely true!" A person revealed it to him during a meal they had together. That person is a retired official from a police department.

I am a Falun Gong practitioner from a county in Chongqing City. In late 2001 the local police held me at a detention center. While there, the guards ordered inmates who were held in the same cell with me to ask me, "Have you ever had any illness, particularly contagious ones in the past? What's your blood type?" The guard told me that if I persisted in practicing Falun Gong, I would be sent to northwest China. He also said that practitioners sent to the Northwest would be turned over to a group of secret police officers in Beijing like commercial goods. The guard didn't know specifically where the practitioners would be taken. That was in 2001.

The inmate said, "Right now (2001), detention centers and prisons in all districts and counties throughout the country are looking for determined Dafa practitioners. These practitioners must have good health, standard stature and no history of illness. They are sent to the north."

One night I had a clear and vivid dream while lying half asleep on the crowded concrete bed. I recall it now like it was just yesterday. In my dream I saw a person's abdomen was cut open with a knife. His organs, such as his intestines, immediately fell on the ground. The organs were fresh and warm. The person whose abdomen was sliced open was standing up, and quickly, another person holding a knife cut out a kidney behind the intestines and took it with him. He even flashed the kidney before my eyes.

I didn't know at the time what this dream meant, but five years later, after the harvesting of organs from living Falun Gong practitioners was exposed, I jolted at the realization that the wicked CCP had probably been brutally murdering Dafa practitioners as early as 2001.

Xu Zhengyi, former head of the Wumahe Forest Bureau Employees' Hospital in Yichun City, Heilongjiang Province spent more than 600,000 yuan in Shanghai for a kidney transplant. After the transplant he developed liver problems, so he went back to Shanghai for a liver transplant. He died on the operating table.

It is quite possible that two Dafa practitioners were killed to make this failed surgery possible.

It was learned that one heart transplant was performed at the No. 2 Central Hospital in Binzhou, Shandong Province last year. And about one month ago a liver transplant surgery was performed at the same hospital. The patient said the hospital hired a doctor from Beijing. The doctors are very young and looked like interns. They left as soon as they finished the surgery. The hospital told the patient that they were able to find a matching liver after three prisoners were executed in Shenzhen City. The liver was transported from Shenzhen City to Jinan City and then to Binzhou City. The story is highly suspicious. Were the three prisoners executed just for the organ transplant? Or is it simply a lie? The details await further investigation.

CCTV Channel 10 broadcast a program entitled "Faceless Man Living in the Depth of the Mountain" at around 8:00 p.m. on June 20, 2006. The program tells of a man of an ethnic minority living in a southwest province whose face was disfigured by a bear. Most of his face including his nose was gone. Other villagers and especially children feared him when they saw him, so he stayed home all the time. The villagers called him, "the faceless man."

The program went on to tell that Xijing Military Hospital Affiliated With the Fourth Military Medical University in Shanxi Province learned about it and offered to restore his face pro bono. They went to the man and paid his fare to travel to a military hospital in Shanxi Province so he could undergo the surgery. According to the TV report, the head surgeon is an expert in facial restoration, but how could he have found a donor willing to give his face and nose in such a short time? The program also said that the first tissue matching failed. A second donor was found, but the second attempt also failed. The third donor's face and nose were the right match, and the surgery turned out successful. How can there be so many "voluntary" donors within such a short period of time? Without a live human organ bank, is it possible?

Investigation Lead: Patients at the Qingdao City Central Hospital Need Only Wait One Week for a Kidney Transplant

The former Qingdao City Textile Bureau Hospital was a hospital for the employees of Qingdao City Textile Bureau. Its name was changed to Qingdao City Central Hospital, also called the No. 2 Hospital Affiliated with the Qingdao University Medical College. Patients waiting for kidney transplants need wait for only one week. The procedure costs between 25,000 yuan and 50,000 yuan. The short waiting period is an indication that the organ source is quite ample at this hospital.

We will conduct further investigations to expose the facts to the world.

Degree certification of the hospital: Top of the third degree

Investigation Lead: Xingtai City Mining Bureau Hospital Provided Kidney Transplant Facilities for a Doctor and a Patient from a Hospital in Beijing

On the evening of May 10, one prospective kidney transplant patient, one organ donor and one transplant surgeon from a hospital in Beijing arrived at the Xingtai City Mining Bureau Hospital.

The transplant surgery was carried out the morning of May 11 at the Xingtai City Mining Bureau Hospital. The kidney donor is a 26-year-old male named Lin Tao from Jilin Province, who donated his left kidney. The recipient is a 37-year-old male named Lin Tiezhu. Lin Tiezhu is probably a Korean from northeast China or South Korea. He doesn't speak any Chinese. Lin Tiezhu was brought to the hospital at around 9:00 p.m. on May 10, and Lin Tao was brought to the hospital late at night. They didn't arrive at the same time.

The staff at the Mining Bureau Hospital raised their suspicions, "The families of both the donor and the recipient are absent during such major surgery. Only the patient, the donor and the doctors are present." After the surgery both the doctor from Beijing and the person who signed the medical forms left, and two new-arriving people were sent to take care of Lin Tao. Aside from the doctors and nurses assigned by the Mining Bureau Hospital, other people were forbidden to approach donor Lin Tao. Two people from Lin Tiezhu's family came to the hospital, one of whom was his older brother. Neither one of them spoke Chinese. All of the surgery expense was charged to Lin Tiezhu.

A 43-year-old man who works at the Longfeng Chemical Factory in Daqing City suffered from severe liver disease. He went to Shanghai Hepatobiliary Institute in early April 2006 and decided to undergo a liver transplant in mid May. Before the surgery the doctor at the Shanghai Hepatobiliary Institute discovered during an examination that the donor had hepatitis, so they did not use his liver. They found another matching donor within one week. They performed the liver transplant surgery between 4:00 p.m. and midnight on May 26, 2006.

The organ donor source was unknown and the hospital kept it as a secret. The search for a matching liver in foreign countries for similar transplants would take several years, due to various constraints. This hospital was able to find a matching organ within only one week, which shows it has access to a large organ supply.

The name of the hospital should be Xinhua Hospital Affiliated With Dalian University, the former No. 5 Research Institute of the Ministry of National Defense. The "expert file" column on Page B46 of June 13 issue of Dalian Bandao Morning News introduced in detail Xu Ning, the doctor who performed the lung transplant. The original newspaper article was captured in the picture below by a digital camera: 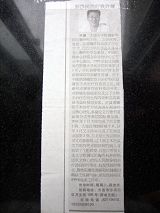 Hospital address: No 156 Wansui Street, Shahekou District, Dalian City, the former No. 5 Research Institute of the Ministry of National Defense

“Achievements On the Path to Godhood”