On May 2, 1999, the "Australia Falun Dafa Cultivation Experience Sharing Conference" was held in a convention center in Sydney. More than 2700 practitioners from Australia, America, Canada, Sweden, Thailand, Japan, New Zealand, Singapore, Hong Kong, Macau, Indonesia, and Mainland China attended. Since the "April 25" Appeal happened one week before the conference, many reporters came and asked for interviews with Master Li, when they heard that the founder of Falun Gong had come to Sydney.

On the morning of May 2, Master came to the conference and gave a lecture. The content of the lecture was published later--"Teaching the Fa at the Conference in Australia". After the lecture, practitioners shared their cultivation experiences. Master stayed and listened to practitioners sharing. 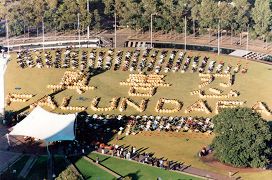 The next day, practitioners were assembled at a famous tourist spot at 7 o'clock in the morning and did group exercises. The blue sky, green lawn, gentle music and the Chinese characters--"Truthfulness-Compassion-Forbearance" and the English words--"Falun Dafa" formed by practitioners in yellow T-shirts formed a very beautiful scene.

Master was on a tower watching practitioners doing the exercises. Later, He smiled and picked up the microphone and talked to practitioners, encouraging them. Practitioners were very glad to listen to Master. The scene was very touching.

After the group exercises, the sharing conference resumed. A practitioner told Master that many new practitioners who had babies had never seen Master. Master said: "You keep this in mind, and I will find a time to meet them." This practitioner informed the practitioners with babies to wait in the nursery.

Later, for some reason, the practitioners with babies and all the children were moved to another room. When that practitioner realized that he should tell Master about the room change, he found out that Master had already gone to the nursery and greeted them.

Those lucky practitioners still remember Master's arrival clearly. They recalled that Master showed up in the nursery suddenly. Everybody went to Master and surrounded him. Master shook hands with everybody. There were two 4-month old babies. Master went to them and touched their faces and hands. The practitioners will never forget this meeting. Time goes by fast. Those lucky babies have already grown up and become young practitioners. They attend all kinds of Dafa activities with other practitioners.

Master met with reporters from Chinese and English media during the conference. Reporters asked many questions, and Master answered them all. A Western reporter, all of sudden, asked some questions in bad manner. The questions he asked were considered treacherous. But Master answered him calmly and peacefully with His broad heart and righteous mind. Master's answers and his personality greatly impressed everybody. As practitioners, we were also very proud of our Master and had the highest respect for Him.

At night, Master had dinner with some practitioners. Master looked serious at the dinner, so everybody felt heavy too. Since nobody was having food, Master smiled and asked us to eat. Master also told us stories. He told us about the history of the universe, and the relationship between the astonishing history and Australia. He told us how Australia established its predestined relationship with Dafa and Master in history.

It has been seven years. In these seven years, Dafa disciples have been solidly validating the Fa, exposing the persecution and saving sentient beings. Under Master's protection, Dafa disciples are passing through the storms. At this crucial moment, when all the gods are paying attention, to not betray Master's benevolent salvation. Dafa disciples should keep Master's teaching in mind, follow the Fa-rectification process, and do the three things well. We should cultivate well and walk well our path so that Master won't worry about us.

“Russia: Practitioners Clarify the Truth to Chinese Workers at a Construction Site in the Far-East (Photo)”