Investigation Leads: Beijing Chaoyang Hospital Performed As Many As 21 Kidney Transplants In One Day

(Clearwisdom.net) The Falun Dafa Association and Minghui website [Chinese version of Clearwisdom] founded the "Coalition to Investigate the Persecution of Falun Gong in China" on April 4, 2006. The coalition calls for people from all walks of life and any organization, to form a united investigation group, and to gather possible leads for investigation of illegal organ harvesting. The following are some leads we obtained recently. We hope all those who have special knowledge about such activities will assist us continue to expose the inside stories of labor camps, prisons, and hospitals in China that are colluding with each other to persecute Falun Gong practitioners. Together we are striving to end the persecution.

Investigation Leads: Beijing Chaoyang Hospital Perform As Many As 21 Kidney Transplants In One Day

A friend of mine told me: "During the years 2000 - 2001, Beijing Chaoyang Hospital performed many kidney transplants, including on weekends. They did as many as 21 such operations in one day. They also performed many transplants on other days."

"Qilu Evening News" published an article on May 17, 2006, entitled "Rare liver disease suffered by a member of an ill-fated family" (by reporter Peng Dong and intern Luo Zhen). According to the article, on April 26, Jinan Province Hospital did a liver transplant for a patient who suffered from Wilson's disease or hepatolenticular degeneration, and the hospital waved the fee of 150,000 yuan. The director of the hospital's transplant center and Liu Jun, the liver surgical department, were interviewed. According to Liu Jun, the only treatment for Wilson's disease or hepatolenticular degeneration is a liver transplant. 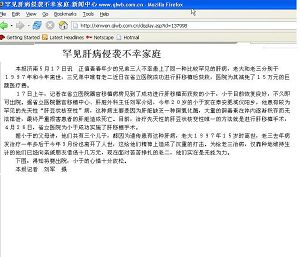 The chief surgeon's last name was Li, from Changyi. He said the organ came from a prisoner. Jinan Military Medical Hospital has a capable organ transplant team, though other hospitals are equally good. Sometimes more than 20 such transplants are performed in one day. What is the source of these organs?

Investigation Leads: A Worker who was severely Burned was Given an Entire Human Skin Transplant Within 4 Days

In May 2006, a technical worker, Mr. Deng, suffered burns over 900f his body from an accident at a foundry in Baoji City. A great amount of molten iron had splashed on his clothes. A week later he was transferred to Harbin No. 5 (Burns) Hospital for treatment.

The hospital brought the skin of an entire body in, which cost about 50,000 yuan. It took only three days to find a skin donor and the skin transplant was performed on the 4th day. It is rumored that this human skin was flash frozen at minus 200 degrees to keep it fresh until the operation.